MMA Top 10 Flyweights: Joe Benavidez Will Be the Best 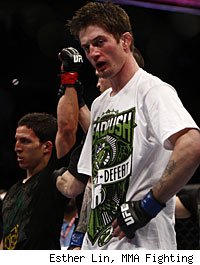 When we assemble a list of the Top 10 flyweights in MMA, there's a lot of guesswork involved, because the flyweight class really hasn't been established in MMA.

That's about to change, however, thanks to the UFC's announcement this month that it will launch the flyweight division in March. Previously, there just weren't any high-paying fights for 125-pounders, which meant that the best natural flyweights in the world were fighting bigger opponents at bantamweight.

Top 10 Flyweights in MMA
1. Joseph Benavidez: I've been saying for years that Benavidez would be the best flyweight in the world just as soon as he had a flyweight class to fight in. In 2012, we'll see if I was right.

2. Demetrious Johnson: "Mighty Mouse" has incredible speed and good wrestling and has been quite successful at bantamweight. He lost his last fight to the champion, Dominick Cruz, but now that he's a flyweight he won't have to face the huge reach disadvantage that he had in the Cruz fight.

3. Ian McCall: The reigning Tachi Palace flyweight champion, McCall will get a chance to prove that he's the best flyweight in the world now that he's with the UFC. He debuts against Johnson in March.

4. Jussier da Silva: da Silva was widely regarded as the best flyweight in the world before he lost the Tachi Palace championship to McCall. Since that loss he's gone right back to his winning ways with three straight victories, most recently with a first-round submission win over Rodrigo Santos in Brazil. He'd be a great addition to the UFC's flyweight class.

5. Yasuhiro Urushitani: The reigning Shooto 123-pound champion is coming off a great head-kick victory and now gets ready to face Benavidez in what should be a sensational fight.

6. John Lineker: The reigning bantamweight champion of Brazil's Jungle Fight promotion, Lineker is expected to start fighting at flyweight in the UFC in 2012. I'm eager to see what he can do: In Brazil, he's been incredibly active (13-0 in the last two years) and incredibly exciting, with a wild striking style that has opponents not knowing what to do. The 20-year-old Lineker still has room to improve, especially in his ground game, but that improvement is going to be a lot of fun to watch. I think he's a future flyweight champion.

7. Darrell Montague: Montague lost to McCall in his most recent fight, but his only loss other than that was to the much bigger Robert Peralta. It should be just a matter of time before he's a UFC flyweight.

8. Shinichi "B.J." Kojima: Kojima was once recognized as the best flyweight in the world, but after losing to da Silva in 2009 he took more than two years off. Now he's finally back and on a two-fight winning streak, and I expect to see him in the UFC -- he told me in 2009 that he wants to fight for Zuffa.

10. Louis Gaudinot: Immediately following Gaudinot's loss at the Ultimate Fighter Finale, I wrote that he's too small for bantamweight and had to fight at flyweight. I think we'll see good things from him back at 125 pounds, where he's more comfortable.