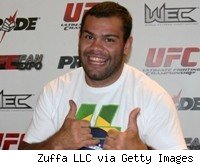 One-time UFC title challenger Gabriel Gonzaga is back with the UFC.

According to his own Team Link academy website, the 32-year-old Brazilian has signed a four-fight deal with the UFC and will replace Rob Broughton against Edinaldo Oliveira at UFC 142 in Brazil.
Gonzaga (12-6) is most remembered for his loss to Randy Couture in a heavyweight championship bout at UFC 74 in August 2007.

Gonzaga last competed for the UFC at UFC 121 in October 2010 in a loss to Brendan Schaub, prompting the UFC to hand him his walking papers. Rather than fight for less money in smaller MMA promotions, Gonzaga said he would step away from MMA. But as most MMA "retirements" go, Gonzaga's absence was also short-lived. Gonzaga made his MMA return just under a year later, defeating Parker Porter this past October at a Reality Fighting event in Uncasville, Conn.

Oliveira (13-0-1) has spent his entire career in Brazil and will be making his UFC debut on Jan. 14.