Bahadurzada, Broughton, Nedkov Out of UFC 142 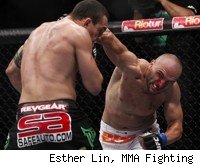 Siyar Bahadurzada, Stanislav Nedkov and Rob Broughton have been pulled from the UFC 142 card on Jan. 14 in Rio de Janeiro, Brazil, the UFC announced Friday.

Paulo Thiago is reportedly off the card as well, though the UFC has yet to confirm Thiago's removal. Tatame.com says Thiago suffered an elbow injury in wrestling practice and adds Nedkov is out due to VISA issues.

These changes affect Erick Silva, Mike Pyle, Fabio Maldonado and Edinaldo Oliveira, all of whom will need new opponents.

UPDATE: Gabriel Gonzaga will step in for Rob Broughton against Oliveira.
Headlined by Jose Aldo defending his UFC featherweight title against Chad Mendes, the current UFC 142 card is below.