Winners and Losers in the New Strikeforce-Showtime Deal 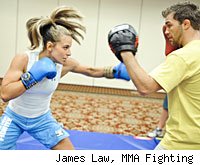 Showtime and Strikeforce have agreed to a new deal for more fights on the premium cable network, an announcement that comes as something of a surprise following months of speculation that the UFC would completely absorb the promotion it purchased early this year.

That news will have a wide-ranging impact on the mixed martial arts world, including the fighters, the promoters, the networks and the fans. We examine who the winners and losers are in the new Strikeforce-Showtime deal below.

Winner: Strikeforce women's champions Cris Cyborg and Miesha Tate
It was a little jarring to hear UFC President Dana White, who's far from the biggest supporter of women's MMA, talk on the conference call announcing the new Strikeforce-Showtime deal about how great this will be for female fighters. But he's right: Showtime made a specific point in this announcement of singling out Cyborg and Tate as champions who would be involved in big events going forward. The UFC isn't ready to feature women's MMA, but Strikeforce and Showtime are.

Loser: Strikeforce lightweight champion Gilbert Melendez
White insisted that Melendez is excited about the opportunities he has ahead of him to continue defending his Strikeforce belt, starting on Saturday night against Jorge Masvidal. That may be true, but it's also true that Melendez is a great competitor who craves top-level competition, and he's just not going to get that outside the Octagon. If Melendez beats Masvidal, he'd be very worthy of the next UFC lightweight title shot, against the winner of the upcoming Frankie Edgar-Ben Henderson fight. Instead, Melendez will remain in Strikeforce, no doubt putting on solid performances -- but not getting the opportunity to do what he really wants to do, which is prove that he's the best lightweight in the world.

Winner: Showtime
Even though the new Strikeforce won't be quite as good as the old Strikeforce (the UFC has, after all, already taken away some of the biggest stars, like Alistair Overeem, Dan Henderson, Cung Le, Jake Shields and Nick Diaz), this deal still means that Showtime will be the home of the biggest names in MMA outside the UFC. As a subscriber-based business, Showtime is less interested in attracting broad audiences than in attracting the kinds of loyal viewers who are willing to pay for content. That perfectly describes hard-core MMA fans: The people who love the sport really love the sport and are willing to show that love on their cable bills. Keeping Strikeforce means keeping tens of thousands or hundreds of thousands of MMA fans who only subscribe to Showtime to watch Strikeforce.

Loser: MTV2, Spike, HDNet and any other network airing MMA
It's already tough to get attention in the MMA media world if you're not with the UFC, and for MTV2 (current home of Bellator), Spike (future home of Bellator), HDNet (home of several smaller and international promotions) and any other channel that's thinking about getting into the MMA business, keeping Strikeforce alive on Showtime makes it tougher.

Winner: Strikeforce heavyweights
Strikeforce will conclude its heavyweight tournament with Daniel Cormier vs. Josh Barnett, then give one more fight to the winner of that, and then move all the heavyweights remaining on the roster over to the UFC. That's big news for the biggest guys getting to fight in the biggest show, and it's the logical conclusion of a movement that is already underway: Strikeforce heavyweight champion Alistair Overeem is already in the UFC, set to fight Brock Lesnar, and the last man Overeem beat, Fabricio Werdum, is headed for the UFC now. Antonio "Bigfoot" Silva is surely set to fight in the Octagon soon, and promising heavyweights like Shane Del Rosario, Chad Griggs, Lavar Johnson and Shawn Jordan will have great opportunities to prove themselves on a big stage.

Winner: MMA fans
With Zuffa planning 40 live events (32 UFC, eight Strikeforce) plus the new live Ultimate Fighter on Friday nights, Bellator looking at a couple dozen events spread over two seasons, HDNet airing a couple shows a month and your random one-off events from other promotions, it's going to be a rare weekend night when MMA isn't on TV. If you're an MMA fan, you've already got plans for almost every weekend.

Loser: Spouses/significant others of MMA fans
With Zuffa planning 40 live events (32 UFC, eight Strikeforce) plus the new live Ultimate Fighter on Friday nights, Bellator looking at a couple dozen events spread over two seasons, HDNet airing a couple shows a month and your random one-off events from other promotions, it's going to be a rare weekend night when MMA isn't on TV. If you're married to an MMA fan, you're not going to be able to make plans for many weekends.