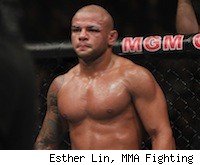 For the third straight year, the UFC will be going Down Under.

The organization officially announced its return to Sydney, Australia, Wednesday night. UFC Sydney, as it's being called, will take place on Saturday, March 3, at the Allphones Arena, formerly Acer Arena, in Sydney.

The event, headlined by Thiago Alves vs. Martin Kampmann, will air on FX in the United States on Friday, March 2, due to the time difference in Australia.

Also scheduled for the event is the semi-finals of a four-man tournament to crown the first-ever flyweight champion. One side of the bracket will see Demetrious Johnson facing off against former Tachi Palace Fights flyweight champion Ian McCall. The other side of the bracket will feature Joseph Benavidez vs. former Shooto champion Yasuhiro Urushitani.