Strikeforce to Eliminate Heavyweight Division in 2012 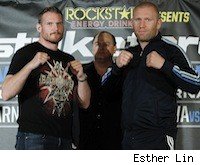 The big men aren't long for Strikeforce, as the promotion will finish out its Heavyweight Grand Prix and soon afterward, eliminate the division in order to focus on its remaining weight classes.

The announcement was made by Strikeforce president Scott Coker during a Thursday conference call regarding the promotion's new extension with Showtime.

"What you'll see after the event with the tournament finals between Josh Barnett and Daniel Cormier, you'll see one more fight where the winner will fight a top-rated heavyweight and then we're going to go back to focusing on our other weight classes," Coker said.

UFC president Dana White, who has a hand in running Strikeforce, cited the lack of depth for the reason from abandoning the class.

White didn't say what the future would hold for most of Strikeforce's signed heavyweights, but it is expected that most of them will be moved to the UFC and bolster depth there. On Thursday, MMA Fighting's Ariel Helwani confirmed with White that recent Strikeforce heavyweight Fabricio Werdum has been signed into the UFC.

The move will be a bittersweet ending for the division that was once Strikeforce's deepest. At the start of 2011, the Heavyweight Grand Prix announcement brought more buzz to the promotion than anything they'd done with the exception of signing Fedor Emelianenko.

But the Grand Prix had its own problems. Emelianenko was eliminated in the first round, Alistair Overeem was eventually cut due to a dispute between Zuffa and his management team, and none of the hoped-for matchups materialized.

The final between Cormier and Barnett is likely to be contested by the end of the first quarter of next year, Coker said. And the end for the division won't come long afterward.