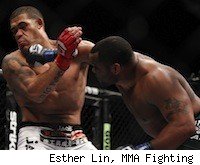 Executives from Strikeforce and Showtime have announced a new contract that will keep the two sides partnered up in the television broadcasting business for at least the next year. Their original deal had been set to expire in early 2012. The new pact will see Showtime broadcast up to eight Strikeforce shows per year. Undercard fights will also air live on Showtime Extreme.

The announcement ends lengthy speculation about the future of the relationship, which seemed unsalvageable as recently as October.

In a joint teleconference including the two sides, UFC president Dana White, who has had an active role in negotiations since mid-October, said the tide turned after a regime change at Showtime.

Asked if a deal could have been struck without the regime change, White said probably not.

"I dont know," he said. "Obviously, it didn't go well [previously]. It probably wouldn't have. Listen, let's cut the b-------. Me and [former Showtime sports boss] Ken Herschman aren't fans of each other. He's not a fan of mine, I'm not a fan of his. He's not there anymore. I flew out there, I liked these guys, and we did a deal, period, end of story."

Stephen Espinoza, who now runs the division as executive vice president & general manager of Showtime sports, would not divulge the length of the agreement between the sides, but promised to continue the long relationship between the brands in presenting Strikeforce as a first-tier product.

White echoed that, saying that Strikeforce would look to sign top available talent, and that fans shouldn't expect it to be run as a "B-league" or feeder system for the UFC, as some had feared.

Among the few changes announced is the eventual abandoning of the heavyweight division. World Grand Prix finalists Daniel Cormier and Josh Barnett will meet in the final -- which is likely to take place before the end of the first quarter of 2012, according to Coker -- and then the winner will fight one more time in Strikeforce before the weight class is discontinued.

The reason? Lack of depth, according to White, who said the promotion will focus on all of its other existing divisions. He also reaffirmed that Strikeforce will continue to promote both the women's 135- and 145-pound classes.

For the first time, Showtime will also have a stake in the event preliminaries, as undercard fights will be aired live on Showtime Extreme.

The first event on 2012's Showtime-Strikeforce calendar will be on January 7, with an event from The Hard Rock Hotel & Casino in Las Vegas, and featuring Rockhold defending his newly won middleweight title against Keith Jardine. The event presentation will look similar to past offerings, with White promising a few tweaks. The announcing team is likely to stay intact, Espinoza added.

The extra events will bring Zuffa's 2012 total to over 40 live shows, making White's schedule a nightmare. "People don't even think it's going to be humanly possible, but I disagree," he said of the travel that will be required of him. But that doesn't mean he's not excited for the potential of Strikeforce, and he plans to offer the UFC's sister promotion as much of himself as is possible in the coming months.

"This is what I love to do," White said. "This is the s--- that gets me out of bed in the morning. The Showtime guys and Scott Coker, everyone will laugh but it's business as usual for these guys. They've had this relationship for a long time. I'm getting involved in this thing and I'm excited about it. I'm going to get behind it 100 percent. Like I said, we're going to get in, we're going to do some fun stuff, make some tweaks and see how big we can make this thing."