Simpson vs. Markes, Brookins vs. Yahya Added to UFC on FUEL Event 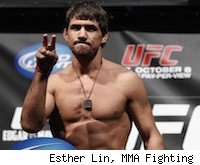 The inaugural UFC on FUEL event added two new matchups on Wednesday when the UFC announced middleweight and featherweight bouts that have been agreed to.

Simpson (11-2) has tried to work his way into middleweight contention with consecutive victories over Eric Schafer, Mario Miranda and Brad Tavares, wins that came on the heels of a two-fight losing streak.

To continue that run, he'll have to beat Markes, who made his octagon debut on short notice and out-worked Karlos Vemola to a decision win in an August event. That match was contested at light-heavyweight, and in this one, Markes (12-1) will attempt to stake out some ground in the UFC's 185-pound division.

The featherweight bout between Brookins and Yahya features a pair of fighters who prefer to look for victory on the ground. Brookins (12-4) has eight of his wins by tapout, while Yahya (16-7) has 14 submission wins. Both men are coming off losses.

UFC on FUEL 1 will take place on February 15, 2012, and though the venue isn't official, it is likely to emanate from CenturyLink Center in Omaha, Nebraska. It features a main event of Diego Sanchez vs. Jake Ellenberger.