Fabricio Werdum Returns to the UFC 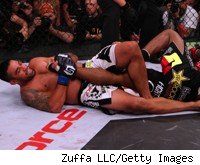 Former Strikeforce heavyweight contender Fabricio Werdum is headed back to the UFC.

UFC president Dana White confirmed with MMAFighting.com on Thursday that Werdum "is a UFC fighter." Terms of the deal were not disclosed.

White would not confirm when Werdum would make his return to the organization, however, MMAWeekly.com and other outlets reported on Wednesday that "Vai Cavalo" would meet Roy Nelson at UFC 143 on Feb. 4 in Las Vegas.

Werdum (14-5-1) last appeared in the UFC in Oct. 2009 when he lost via first-round knockout to Junior dos Santos. The promotion released the Brazilian following the fight, which led to him subsequently signing with Strikeforce. The 34-year-old went 3-1 in Strikeforce, with his defining moment coming in June 2010 when he submitted Fedor Emelianenko in the first round. Werdum was last seen in a Strikeforce cage losing to Alistair Overeem via unanimous decision. He went 2-2 in the UFC.

On Thursday, White announced that the Strikeforce heavyweight division would be abolished in 2012, following the conclusion of the heavyweight grand prix and the GP winner fighting one more time in the organization.