Latest Round of Drug Tests Complete, Alistair Overeem Turns Attention Back to Training 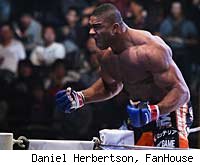 UFC heavyweight Alistair Overeem flew from the Netherlands to London late last night all for -- depending on how well hydrated he is -- what will probably amount to less than a few minutes of work. That's because priority number one for Overeem this week is to take a drug test that the Nevada State Athletic Commission will accept, and then to return to training as soon as possible.

And he does mean as soon as possible.

Speaking from his hotel room in London late last night, Overeem outlined his plan to take the test and then immediately return to his training camp in the Netherlands, where he'll remain until just after Christmas in order to spend as much time with his ailing mother as possible before he meets Brock Lesnar at UFC 141 on December 30.

"It is unfortunate that all this stuff is happening at the same time, but then again, if you operate on this level it's hardly ever perfect," Overeem said of a hectic week that included defending his recent travels to the NSAC on Monday and battling questions about whether he'd intentionally tried to avoid a drug test. "There's always something going on."

NSAC executive director Keith Kizer confirmed to MMA Fighting that Overeem had taken the drug screening at approximately noon London time on Wednesday. Kizer also said the NSAC had never dealt with an issue quite like this one, though the commission is still expecting to receive the results of Overeem's December 7 screening -- a test deemed insufficient because it was taken through Overeem's personal doctor in the Netherlands and then sent to a lab in Germany -- some time later this week.

Though Overeem was granted a conditional license by the NSAC, it's contingent on his drug screenings coming back clear before his UFC debut, and on him taking two more random tests at his own expense in the next six months -- a schedule that will make him "the most tested fighter," Overeem said.

At Monday's hearing, much of the blame for the communication breakdown that resulted in Overeem missing his original drug test deadline was heaped on Overeem's assistant, Collin Lam. But now that he's had a chance to assess the situation more fully, Overeem said, he stands by Lam's efforts.

"I've recently seen the communications, and in my opinion, my assistant was working to the best of his ability. I didn't have a direct line of communication with the commission. They could have contacted me directly and given me instructions."

It's just one distraction of many for Overeem of late. The Dutch heavyweight split with his longtime management at Golden Glory in September over what he termed a "breach of trust," and then moved his training camp to Las Vegas' Xtreme Couture gym to prepare for Lesnar. In November, however, Overeem left Vegas to return home to the Netherlands to see to his ailing mother, who he said is dealing with the after-effects of "harsh treatments" for cancer.

"My mother's situation, of course, it's hard," said Overeem. "She had cancer before two times. Two tumors, the worst ones, were the most aggressive ones. She had the most harsh treatment you can imagine. But the thing is, physically she's not fully recovered, [and] mentally...she had a test recently where they found some suspicious cells, so mentally she's very nervous. That's a little bit hard. That alone is a bit of a distraction, but I have gotten all my training in."

Of course, it's not easy to prepare for a fight with a former NCAA wrestling champion back home in Holland, Overeem admitted. There might be plenty of skilled kickboxers hanging around, but the former Strikeforce heavyweight champ had to fly in some other sparring partners, he said.

It's a lot to deal with, and all less than three weeks before what will likely be one of the biggest fights of his career. But then, Overeem said, he asked for this. The UFC gave him the option of sitting out and facing the winner of the Junior dos Santos-Cain Velasquez fight in November, but Overeem chose to fight Lesnar instead, simply because he wants to "be active," he said.

"I want to get in there. That's the way the fans see you do your thing."

Now that the latest round of tests are complete, all he can do now is wait for the NSAC to get the results while he tries to make the most of the time he has left in the gym.