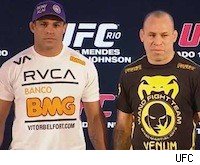 Early Tuesday at a press conference in Rio, UFC president Dana White announced Vitor Belfort and Wanderlei Silva as coaches on the first-ever international edition of The Ultimate Fighter, which will take place in Brazil.

In the past, White said that international editions of TUF would likely air on FUEL as part of their new wide-ranging deal with FOX-owned networks, but on a Tuesday afternoon teleconference, FUEL executive vice president and general manager George Greenberg said that as of right now, the two sides are still in negotiations to bring the new editions of TUF to air in the U.S.

"Right now, any international edition of The Ultimate Fighter is something we are in discussions with the UFC," he said. "We have no firm deal for TUF Australia or TUF Brazil, or any other TUF show right now.

"We'd love to do this," he added. "I don't think it's going to be an obstacle to get through negotiations."

Greenberg said that he believed the channel, which is already planning 2,000 hours of UFC programming in 2012, still has room to add the international editions of TUF.

Asked to describe the negotiations for the TV properties, he said that the relationship has made for easy communications between the two sides thus far, and that they speak four to five times a day.

"For us, negotiations are sort of easy," he said. "Specifically we're in talks, but I can't tell you what stage. Everything we do with the UFC always will turn out with a healthy ending for both parties. If it's good for the sport, it will be good for the UFC, and it will be great for the FOX Sports media group. I can promise you that."

FUEL will kick off its commitment to its new partner with 24 hours of UFC programming on Jan. 1. On Jan. 3, its weekly news show UFC Tonight premieres at 10 pm, hosted by former WEC announcer Todd Harris and featuring our own Ariel Helwani.

Other UFC on FUEL programming notes:

- Live weigh-in shows begin airing on FUEL on Jan. 13, with UFC 142.
- Live event post-fight coverage will feature one-hour shows hosted by Jay Glazer, beginning on Jan. 14 with UFC 142
- FUEL begins televising UFC preliminary fights on Jan. 20, with the undercard of an FX event.
- FUEL will have the right to air the U.S. editions of The Ultimate Fighter 24 hours after original episodes air on FX.
- There will be quarterly "Champion's Roundtable" specials, with past and current titleholders discussing a wide range of MMA topics

FUEL is currently available in about 38 million households, but Greenberg said the channel's goal is to house so much UFC programming that fans will demand and receive it from their cable and satellite providers.

"I can guarantee you we're going to become the most wanted channel in the television landscape," he said.