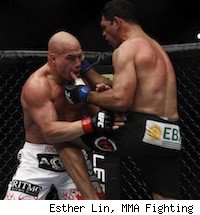 Jon Jones is the most dominant force in MMA today. Yes, more dominant than Anderson Silva or Georges St-Pierre. That became strikingly obvious at UFC 140, when Jones choked Lyoto Machida unconscious in under two rounds.

Jones has absolutely crushed each of his last six opponents, finished every one of them. The last three of them were former UFC champions, a feat unprecedented.

His win over Machida wasn't the most lopsided of his recent run, but that actually made it more valuable as an assessment tool for those of us in the analysis business. Though he was never in any real trouble against Machida in the first round, it was clear he was a bit confused about the proper approach. Meanwhile, Machida was masterfully timing his attacks off counters and clearly felt comfortable with closing the distance between them.

This was the same Machida we had seen in his best days, when he was knocking out Rashad Evans and Thiago Silva, and there was nothing to suggest that Jones could suddenly figure things out between rounds after two months of preparation had left him looking a bit lost.

But whatever advantage Machida had was completely erased between rounds.

Jones made a few slight adjustments, re-took the center of the cage and suddenly seemed to understand everything that was in front of him. Machida landed nothing of any consequence in the round, and Jones drilled him once, cut him open with a slicing elbow, dropped him with a left hand, and finally finished him with a standing guillotine.

Among UFC champs, Jones has the longest streak of consecutive finishes, one that even heavyweight champ Junior dos Santos can't match. Because of it, he's the most dominant force in MMA, at least for now.

On to playing fantasy matchmaker...

Jon Jones
"Bones" will get a well-deserved vacation after four lengthy camps in 2011. Meanwhile, the UFC will wait to see how January's Rashad Evans vs. Phil Davis fight plays out. If Evans wins and comes out unscathed, the UFC will sync him up with Jones for a long-awaited fight that is guaranteed to do big business.
Prediction: Jones vs. Evans, with Memorial Day weekend of 2012 as the target date

Lyoto Machida
Machida is likely still wondering what went wrong after a strong opening round against Jones, but he's hardly the only one who's ever been left scratching his head at how it had all gone awry so quickly. Upon losing, Machida is in a similar position from the one he had before being paired with Jones, with the prospect of waiting since no obvious pairing for him exists right now. He's faced a lot of the big names, already, and several of the other possibilities are locked into other fights.
Prediction: He faces Forrest Griffin

Frank Mir
For a second there, it seemed like Mir was going to be thrust into a replacement role against Brock Lesnar on short notice, but as long as Alistair Overeem passes his pre-fight drug screenings, he won't be needed. It's just as well. Mir would need more time to prep for Lesnar's wrestling style, particularly when the fight would carry with it such major implications. If Cain Velasquez was ready to fight again soon, a Mir-Velasquez fight might make some sense, but he might need some more time off. And since the winner of Lesnar-Overeem will be moved into a title match with champ Junior dos Santos, options are limited.
Prediction: Mir faces the loser of the Lesnar-Overeem fight

Antonio Rodrigo Nogueira
"Big Nog" is a proud man, but you have to wonder if pride is worth a broken bone and time spent on the sidelines when you're 35 years old and in the twilight of your career. It's easy for me to second-guess Nogueira here, so perhaps he thought he had one last escape attempt in him just before his arm cracked. That said, he apparently lucked out as the doctor he recently saw advised him against surgery, saying it would heal on its own in around five months. Still, add in time for a training camp and you're looking at a minimum of an 8-9 month layoff for him.
Prediction: Given the length of time away, it's impossible to predict an opponent, but someone like Matt Mitrione or Roy Nelson might be a possibility.

Tito Ortiz
Tito Ortiz did a very smart thing before his fight with Antonio Rogerio Nogueira. He said he planned to retire in May 2002, 15 years from his first pro fight. That essentially meant that win or lose, he'd probably only fight once more after the Little Nog bout, which he lost by first-round TKO. It was smart because he basically publicly promised Dana White that they wouldn't have to continue the very public debate about his possible retirement. In essence, White wouldn't have to draw the line and be the bad guy since Ortiz drew it himself. That doesn't change the fact that he's 1-6-1 in his last eight fights, but it's probably enough to get him one last fight before calling it quits.
Prediction: I won't even guess the opponent, but the UFC gives him a winnable style matchup against a mid-level opponent.

Antonio Rogerio Nogueira
A couple weeks ago, after Mauricio "Shogun" Rua lost his fight with Dan Henderson, I predicted he would next fight Thiago Silva, but I completely whiffed on the possibility that he could line up a rematch of his 2005 bout with Little Nog, a bout which was one of the best bouts of that year. With both coming off wins, it's now or never.
Prediction: He faces Rua

Chan Sung Jung
The "Korean Zombie" is the UFC's Mr. Excitement, win or lose, creating amazing moments. The latest was his record-tying, seven-second knockout of Mark Hominick, a former No. 1 contender Jung isn't quite ready for the title picture yet, but he's starting to creep into the conversation.
Prediction: He faces Ricardo Lamas

Igor Pokrajac
Pokrajac looked good against the durable Krzysztof Soszynski, needing just 35 seconds to finish him in a KO. The win made him 3-1 in his last four, so let's match the hard-hitting Croatian up with another striker and see what kind of magic they make.
Prediction: He faces Brandon Vera.