Mackens Semerzier vs. Robert Peralta Result Changed to a No Contest 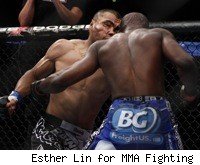 The result of the Nov. 12 Mackens Semerzier vs. Robert Peralta fight has been changed to a no contest following a Tuesday hearing in California, Semerzier's manager Brian Butler-Au of SuckerPunch Entertainment confirmed with MMAFighting.com.

Peralta stopped Semerzier on the undercard of the UFC on FOX card last month after initially connecting on what appeared to be an accidental illegal headbutt. He ended up finishing a dazed Semerzier with strikes on the ground. The initial ruling was a TKO at the 1:54 mark of the third round.

Semerzier appealed the result to the California State Athletic Commission, stating that the illegal headbutt led to the finish. Referee "Big" John McCarthy, who worked the fight, which took place at the Honda Center in Anaheim, Calif., also sent in a letter of recommendation to the CSAC supporting Semerzier's appeal. After reviewing the fight and the supporting paperwork filed by Semerzier's camp, the commission decided to overturn the result.

Butler-Au attended the CSAC hearing Tuesday morning in Van Nuys, Calif. Semerzier could not attend due to an illness. The commission requested Peralta to attend the meeting, but according to Butler-Au, Peralta never responded to the request.

Semerzier is hoping the UFC now books a rematch between the two featherweights to finish what they started on Nov. 12.