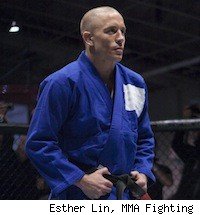 The procedure will be done at the Kerlan-Jobe Orthopaedic Clinic in Los Angeles, a renowned facility for sports medicine among professional athletes. It will be performed by Dr. Neal ElAttrache, the team physician of Major League Baseball's Los Angeles Dodgers, who is considered one of the most accomplished orthopedists in sports medicine.

In a recent teleconference, St-Pierre's personal orthopedist Dr. Sebastien Simard said that the surgery would require a total reconstruction of St-Pierre's anterior cruciate ligament along with repairing damage in his meniscus.

Estimates for his return have ranged from between 6-10 months, depending on how he responds to physical rehabilitation.

St-Pierre (22-2) attributed the knee injury to overcompensation issues. Just prior to it, he had hurt his left knee, and believes the extra stress on his healthy knee led to the ACL tear. The major injury happened during a wrestling training session. At the time, St-Pierre heard a crack and felt pain but attempted to continue.

In the days afterward, St-Pierre suffered no swelling, so he was convinced it was only a minor setback, but the stability never improved, eventually leading him to a pair of MRIs that both confirmed extensive damage.

The injury of course, forced St-Pierre out of a planned February bout with Nick Diaz, and his spot was taken by Carlos Condit. The Diaz-Condit bout has now been designated as an interim welterweight title fight.

St-Pierre has reigned over the welterweight class for over 1,300 days since defeating Matt Serra at UFC 83 in April 2008. Upon his return, St-Pierre will fight the interim champion in hopes of re-staking his claim to No. 1.