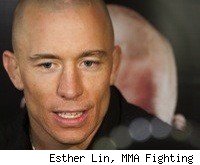 "It went great," Zahabi wrote via text message. "The doctor said it could not have gone better."

The surgery was performed by Dr. Neal ElAttrache at the Kerlan-Jobe Orthopaedic Clinic in Los Angeles, a renowned facility for sports medicine among professional athletes. St-Pierre's team expects the champion to return to action in 2012. The recovery time could be anywhere between 6-10 months.

In the meantime, the UFC has booked an interim title fight between Nick Diaz and Carlos Condit for UFC 143 in February.

It was announced last week that GSP had completely torn his anterior cruciate ligament and damaged his meniscus.