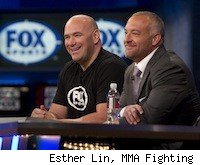 Fresh off the momentum of signing the first network deal in UFC history, organizational executives Dana White and Lorenzo Fertitta have been listed among the "50 Most Influential People in Sports Business" by Sports Business Journal, a leading publication among movers and shakers in the world of sports.

The publication cited the UFC's move to FOX-owned networks as well as expansion into South American and Asia as a "watershed year" for the promotion.

It was the first time UFC brass made the cut for the SBD list, which has been released each December since 2004.

White and Fertitta were among the many heads of major sports named to the list. Major League Baseball commissioner Bud Selig was first among them, followed by NFL boss Roger Goodell and NBA head man David Stern.

The pubilcation's overall choice for No. 1 was Steve Burke, the president and CEO of NBC Universal Holdings, who heads both NBC Sports as well as Versus, which is soon to be renamed NBC Sports Network. He was cited for his winning Olympics rights bid as well as other major business moves since the recent Comcast-NBC merger.

Meanwhile, White and Fertitta's new partners at FOX were also named among the leading powers in sports, with FOX Sports media group chairman David Hill, and co-president and COO's Eric Shanks and Randy Freer collectively ranked at No. 5. SBD cited several FOX deals in 2011 but noted "its biggest splash might been with the UFC, which it brought to broadcast television for the first time."

The seven-year deal between the two sides is reportedly worth about $700 million over the full term. It officially begins in January with a Jan. 20 show on FX followed by a Jan. 28 show on FOX.