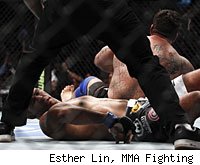 Two days after he broke the arm of Antonio Rodrigo Nogueira at UFC 140, Frank Mir said that he felt badly for Nogueira's injury, but he expressed pride in his first-round submission finish.

And as for the talk that Mir might be pressed into service to fight Brock Lesnar at UFC 141, Mir said he doesn't know anything more than the fans know about the reports that Alistair Overeem may not be able to fight Lesnar as scheduled.

In an appearance on The MMA Hour, Mir said that when he locked in the kimura against Nogueira, he simply wanted to hold on until he had won the fight.

"I just locked it up and I wanted to make sure he didn't get out," Mir said. "I'm locking up a submission, and in my mind I want to keep applying force and don't lose it."

Mir, who previously broke Tim Sylvia's arm in a UFC heavyweight title fight, said that doesn't take any satisfaction in injuring an opponent.

"I just want to win the fight," Mir said. "The fact that you have to go get medical treatment after it, I don't take credit for that. That sucked. He's another martial artist I hope he can go back to the gym Monday like everyone else."

Nogueira actually got off to a great start in the fight, hitting Mir hard and appearing to have him badly hurt. Mir acknowledged that Noguiera caught him by surprise by throwing punches, rather than immediately going for a takedown, and that those punches wobbled him.

"I was pretty stunned," Mir said. "He caught me really good on the ear. That's why my legs were so wobbly. When I first shot I was dizzy."

As for the talk that Overeem could be out of his upcoming fight with Lesnar, and that Mir could take Overeem's place, Mir said he doesn't know anything about it but will accept the fight if it's offered to him. But if Lesnar isn't his next opponent, Mir hopes he's fighting someone who gives him a chance to prove that he deserves the next shot at the UFC heavyweight title.

"I want a fight that's a positive step toward a title shot," Mir said. "When they start naming opponents I'll ask, that it's someone that takes me closer to No. 1 title contention."