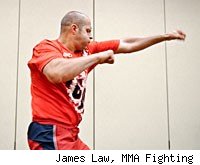 The promotions confirmed the fight's booking in a joint news release on Monday afternoon.

It will be the first time Emelianenko fights in Japan in exactly four years, since defeating Hong-Man Choi. That fight led to his arrival in the US and Affliction before he eventually moved on to Strikeforce.

Emelianenko (32-4, 1 no contest) recently snapped a three-fight losing streak by defeating Jeff Monson in a unanimous decision at an M-1 event in St. Petersburg, Russia.

The fight with Ishii had been rumored for some time, but for a time it wasn't expected to happen until officials pulled it together during the past week.

Ishii will be at a severe experience disadvantage, having fought just six times in his career. He's 4-1-1 overall, and most recently fought at a independent show in Brazil where he fought to a draw with former WEC middleweight champion Paulo Filho. In 2008, Ishii captured an Olympic judo gold medal in the 100+ kilogram weight class.

Among the other fights officially confirmed are a lightweight bout between Shinya Aoki and Satoru Kitaoka, and a featherweight bout pitting Tatsuya Kawajiri and Kazuyuki Miyata.