Carlos Condit Is a Nick Diaz Fan, and Looking Forward to Matchup of Similar Styles 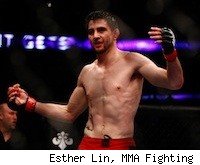 Got all that? If not, the bottom line is Condit and Diaz are paired up in a bout that promises fireworks. And as far as Condit is concerned, that's just fine.

"Seeing everything that's happened over the past couple months, I kind of just had to laugh," he said on Monday's edition of The MMA Hour. "It's crazy, a lots of ups and downs but after all this turmoil and stuff, it ended up going my way."

Condit (27-5) said that he is a fan of Diaz's fight style, likening it to his own aggressive approach that often leads to crowd-pleasing fights.

Because of their similar styles and go-for-broke mentalities, many believe that a Condit-Diaz bout will be more intriguing than one involving St-Pierre. Though he doesn't necessarily agree, Condit is convinced the duo will produce something special at UFC 143.

"Whether it's an interim title or not, this is what the fans have been screaming for from the welterweight division," he said. "They're looking for exciting fighters, guys who go out and put it on the line and come to thrown down win, lose or draw. I think both Diaz and myself are those guys."

The switch from Koscheck to Diaz was a major shift in opponent base. Given his NCAA wrestling pedigree, Koscheck brings with him the constant threat of the takedown. Diaz is nowhere near as accomplished in that area though he compensates well for it with his dangerous ground game.

Condit noted that he could be described in a similar way, and even though he believes he had the tools to overcome Koscheck, he likes the Diaz matchup.

"Nick is a physically tougher guy, but I think his style matches up better with me, he said. "We're both standup fighters and we both have a jiu-jitsu base. I think Nick's style is definitely a better matchup for me."

Condit said he still hopes to fight Koscheck at some point in the future, but his long-term hope is of course to fight St-Pierre, the longtime division champion who will be on the sidelines for possibly up to 10 months will recovering from a torn ACL in his right knee.

To do that, he'll have to get through one of the sport's most fierce competitors, a guy who he has come to enjoy watching.

"As a fighter, I am a fan," he said. "I think he's a great fighter. He's had an impressive run lately. He's top notch, one of the best in the world. I don't know the guy personally, so I can't really speak to whether I'm a fan of his personally. I think he's got a bad attitude, but you've got to be yourself, so that's just him doing him."