Overeem-Lesnar Fight Threatened by Drug Testing Issue, but Still on for Now 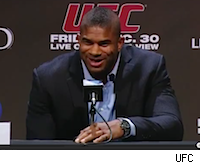 Alistair Overeem's long-awaited UFC debut as well as a UFC 141 match with pay-per-view powerhouse Brock Lesnar was threatened after Overeem's request for a Nevada fighter's license was debated during the state's athletic commission in a Monday hearing.

In a meeting at the Grant Sawyer State Office Building in Las Vegas, commission executive director Keith Kizer told the governing body that he had difficulty in setting up a random drug test with Overeem after informing him of his intentions on November 17. Random tests are generally completed within 48 hours of notice.

And now, almost a month later and with less than three weeks to go until the fight, they have yet to receive test results from him.

Overeem, who was sworn in and gave his side of the story over the phone, explained that he provided a blood test which the NSAC acknowledged receiving. While that blood test -- taken on Nov. 23, six days after his original notice -- came back clean, it was not the proper NSAC mandated urine test, known as a "basic steroid panel."

Overeem said that after being notified of that, he took a urine test on Dec. 7, but neither he nor the NSAC have yet to receive the results. In addition, Overeem admitted that he took the second test at his personal doctor's office and sent it off to a lab in Germany.

As a result, NSAC was faced with a decision of whether or not to license him.

The Overeem debate took about one hour and forty minutes before coming to a conclusion. During it, Overeem was asked to detail the timeline from the moment he received notice of the test to the most recent Dec. 7 test. A commissioner explained that Overeem was given notice on November 17 and coincidentally returned to Holland from the U.S. on the same day. But he said he had not yet received word of the test, and had previously planned to return to Holland to help care for his ailing mother.

In one of the most pointed back and forths of the hearing, Overeem was asked if he made any efforts to delay the test, which would have offered him time to clear his body of any illegal substance he could have taken.

"I did not make any efforts to avoid any testing, and furthermore, I have done exactly what I was told to do by my assistants who were being told what to do by Mr. Kizer," he said.

Commission members later said they believed Overeem's version of events, but one commissioner noted that "the public wants to feel comfortable with this."

After a motion to grant him a conditional license based mostly upon the result of that Dec. 7 test failed, a compromise was offered where he would offer an observed urine test at an independent lab within 72 hours, the standard pre-fight test before the event, and then he would be subject to two random drug tests in the next six months at his own expense.

Overeem accepted the terms, which were approved by the commissioners in a subsequent vote.

As a result, Overeem has a conditional license, but will not be fully cleared to fight Lesnar unless the test comes back clean.

Nevada only recently began to ramp up random, out-of-competition testing after Gov. Brian Sandoval signed a bill into law that would increase funds for drug screenings. The change went into effect on July 1. The state has had the power to conduct random screenings since 2008 but often lacked the funds to employ it.

Overeem's difficulty in getting licensed for UFC 141 continues a rough stretch for the Dutch star, who recently filed a lawsuit against his former Golden Glory management team for their alleged refusal to fork over more than $150,000 he says he's owed. In addition, after beginning his training camp in the U.S., he recently returned home to help tend to his mother, who is recovering from cancer.

Overeem had been the Strikeforce heavyweight champion and participated in the organization's World Grand Prix, winning his quarterfinal fight against Fabricio Werdum in June. Shortly afterward, he was cut due to a dispute between his management team and Strikeforce parent company Zuffa. When he was brought back, he was signed on to the UFC brand and thrust into the midst of the heavyweight title picture, but after Monday's hearing, he still has some work to do to get licensed and ensure his participation on the Dec. 30 date.