Rory MacDonald vs. Che Mills Slated for UFC 145 in Montreal 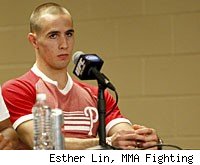 Welterweight prospect Rory MacDonald will make his return to the UFC in March against Che Mills, MMAFighting.com has confirmed with sources close to the fight.

The Canadian MacDonald, who pulled out of his UFC 140 fight against Brian Ebersole last month due to an injury, will meet Mills at UFC 145 on March 24 at the Bell Centre in Montreal.

The organization has yet to officially announce its return to "La Belle Province" or any fights on the card.

Mills (14-4, 1 NC), a British fighter who made his Octagon debut at UFC 138 last month, has won his last five fights in a row. The former Cage Rage British welterweight champion needed just 40 seconds to beat Chris Cope in his UFC debut.