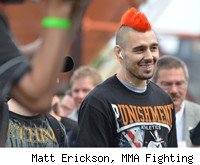 UFC 140 goes down from the Air Canada Centre in Toronto on Saturday night, so my original plan was to square off against a Canadian fighter in this edition of Fighter vs. Writer. But then, this card isn't like the UFC's last trip here, which had a distinct Canada vs. USA feel to it. Of course, it also didn't seem right to take on an American fighter, so I had to find a compromise.

Enter British welterweight Dan Hardy, who graciously agreed to match wits with me in a prediction battle to the bitter end. Dan's been given his instructions in the dressing room, and me? I stay ready. So I ain't got to get ready.

Hardy: Jones via TKO. I don't see anybody beating Jones at the moment. Athletically, physically, he's too dominant for anybody in the division, really. The only person who comes close is Rashad [Evans], and I don't even think Rashad can beat him. I think Machida's going to run out of options very quickly.
Fowlkes: Jones via TKO. The champ's range and speed will prove to be too much for Machida, who lacks the one-punch power to give him even the outside chance that his last two predecessors had against the phenom Jones. I predict a one-sided destruction from start to finish.

Hardy: Mir via TKO. I've been sparring with Frank and he looks good. I've been doing his first and last round of sparring with him, and he's been the doing the rounds in between with Roy Nelson, Mike Whitehead, and Forrest Griffin. He's been working really hard and he's really invested himself in this fight. I think it's a first-round knockout.
Fowlkes: Mir via TKO. Big Nog rose from the ashes to knock out Brendan Schaub, but maybe he should have called it quits there. He can't take it quite like he used to, and he's even less fleet of foot now than he was back in his heyday. That's a troublesome combination. He won't be able to get Mir down, which leaves Mir with all the options.

Hardy: Ortiz via decision. I've always respected Little Nog's boxing, and for me, that's Tito's weakness. He's got a cookie-cutter boxing style. But on the other hand, Tito can put him on his back, which I think he might be able to do. I don't think the fight will be stopped either way, though.
Fowlkes: Ortiz via decision. This is shaping up to be a boring edition of Fighter vs. Writer, what with all this polite agreement, but I also think that Ortiz's takedowns will probably make the difference, just like I also think it will go the distance either way.

Hardy: Ebersole via submission. I have to take Ebersole because of his experience. He gets in there and he's so confident because he knows he has that experience, and he's not afraid to take a few risks. I don't know how Patrick is going to deal with that. He's not fought a guy like that before. Not many people have.
Fowlkes: Patrick via decision. Okay, I can't go along with "The Outlaw" any more. I'm leaning toward Ebersole, but I'm flipping over to the Patrick camp because a) this is a close one that could go either way, and b) I can't keep parroting Dan's answers. That's just no fun.

Hardy: Hominick via TKO. Without a doubt, Hominick is safe money in that one. He's probably one of the best guys in that division, as far as technical boxing. I think the Korean Zombie is a little too wild. I think Hominick will expose him.
Fowlkes: Hominick via TKO. Even I can't bring myself to be enough of a contrarian to pick against Hominick in this one. He has all the advantages, and I think the Zombie will end up taking a beating.