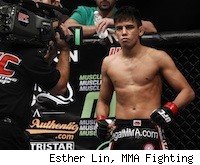 Answer: You don't. Not until it's too late. Not until your fate is already sealed. And that, whether you think of yourself as a shockingly clever Twitter comedian or a press conference trash-talk specialist, is a problem.

As you probably know by now, two UFC fighters made the issue of sexual assault into fodder for their own attempts at entertainment this week, but with very different repercussions.

At a UFC on FOX press conference earlier this week, light heavyweight Rashad Evans referenced the Penn State sex abuse scandal when trying to zing former Nittany Lions wrestler Phil Davis. Meanwhile on Twitter, bantamweight Miguel Torres joked about "rape vans," suggesting that if they were renamed "surprise vans," maybe people would be more likely to ride in them.

Go out on the street and present these two cases to strangers who know nothing about the world of the UFC. See if they can guess which guy got fired, and which got off with just a stern talking to. I'll bet you a six-pack of your finest domestic ale that more people guess wrong than right.

And honestly, who could blame them? At the risk of getting into the nebulous business of doling out offensiveness points for each remark, I feel pretty confident asserting that what Evans said was far worse than what Torres tweeted. Evans took a real situation, involving real, living children who have suffered through an unimaginable nightmare (here we insert that useful qualifier allegedly), and made light of it for the purposes of insulting a future opponent.

Torres? His tweet similarly made light of sexual assault, but at least he wasn't using a specific incident involving living people as his springboard to comedy. At least he was dealing more in the abstract, and at least he didn't say it while trying to promote a fight being broadcast by the UFC's new network TV partner.

But really, that's splitting hairs. Both guys messed up. Both should have known better, especially after Forrest Griffin made headlines with the exact same mistake very recently. But the consequences for Evans and for Torres were so bafflingly different, it's hard to call it anything other than open hypocrisy on the UFC's part.

UFC president Dana White told our own Ariel Helwani that he likes to decide these things on a case-by-case basis. He talks to the parties involved (or, in the case of Torres, has someone else talk to him and report back), asks them to explain just what in the hell was going on in their heads when they made these remarks, then decides on how to deal with them.


In the case of Evans, the explanation was that he got carried away trying to burn a college rival for the entertainment of others. This, apparently, was good enough. He got a lecture from White, and that was that.

In the case of Torres, he was trying to be funny. As anyone who follows his Twitter already knows, it's something he strives for often, and he probably hits more than he misses. This time he missed, and it cost him his job. Could he have possibly known beforehand that this tweet would get him fired? Not really. He should have known that it might get him in trouble, that it was a bad idea and a pretty tasteless attempt at humor, but there was no precedent to suggest that a UFC fighter might lose his job for joking about sexual assault. Those jokes had happened already, but the firings hadn't.

That's the problem with the whole case-by-case basis method, as presented by White. Fighters are put in the position not of figuring out what's right and wrong, or what's a good idea and what's a bad one. No, they just have to figure out how the boss is going to react, and that seems largely dependent on who they are and what they mean to the company.

Don't believe me? Imagine for a moment that Brock Lesnar had sent out the exact same tweet as Torres. You think he'd be headed back to the WWE with his pink slip in his enormous hands right now? Not a chance. He'd have gotten a phone call from White and a slap on his enormous wrists, and that would have been that.

But Torres? He sends out a tweet that Michael Landsberg uses to surprise and embarrass White with on Canadian TV, and on the week of an event in Toronto? Screw him. He's done.

Not only is that not fair, it doesn't even serve the desired purpose. It doesn't make UFC fighters in general more sensitive to what might offend others. It just makes them perform an internal calculus to assess their own standing and value to the UFC before they determine what they can get away with.

This is only part of the reason why the UFC needs a clear, consistent code of conduct for its fighters. It needs some formal policy that not only tells fighters in plain English (or Portuguese or Japanese or French, etc.) what not to do before they do it, but also what's gong to happen to them if they do it anyway.

The UFC needs this not just for tweets and jokes and public comments, but also for more serious issues like drug abuse and criminal offenses. Anybody remember Vinicius Quieroz? He's the Brazilian fighter who was released after one fight when the UFC's independent drug tests nabbed him for steroid use. Meanwhile, Chris Leben tested positive for the same exact steroid on a different fight card, then tested positive for prescription painkillers Oxycodone and Oxymorphone in his most recent outing, and he got off with suspension in both cases.

That's what you call a double standard. When two UFC employees can commit the same offenses and receive different punishments, it tells everyone -- fans, fighters, media, sponsors -- that this is not a level playing field. All are not equal in the UFC's commonwealth. Some guys can be jerks and get away with it, while others get fired.

It's not just a question of forcing the UFC to slap all the wrists equally. When White says he doesn't see the point of reading some canned statement written by a lawyer just to mollify critics, he makes a good point. That wouldn't accomplish much, and it would clearly be an empty gesture designed solely to get people off his back.

But neither does it help to apply a hazy standard of decency unevenly after the fact. If no one knows for sure what's permitted and what isn't, some people are bound to mess up without realizing what they've done. As of now, UFC fighters have no way to determine how the UFC will punish them, or even if it will punish them at all.

That's not fair to the guys like Torres, who got made an example of even after previous examples got away with almost the exact same thing. It's also not helpful to guys like Griffin or Evans, who have essentially learned that they can get away with the kind of stuff that will get the Miguel Torreses of the UFC world fired.

That's why the UFC needs a code of conduct that spells out which infractions will result in which punishments. It needs to let fighters know where the line is before they've crossed it. It needs to let fans know that it's serious about making sure fighters conduct themselves like professionals, and not just with smacking them around after the fact, with the force and severity of the blows dependent on how many pay-per-views they sell. It needs a little consistency and a little fairness. The sooner it institutes such a policy, the sooner it can stop some of this stuff before it starts.