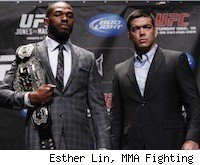 If Jon Jones beats Lyoto Machida in UFC 140's main event on Saturday, he will have completed one of the greatest calendar years in modern MMA, having defeated Machida, Mauricio "Shogun" Rua, Quinton "Rampage" Jackson and Ryan Bader.

Going into their fights with Jones, the quartet entered with a collective .851 win percentage and three of the four had been champions in the UFC. So far, Jones has manhandled Bader, Rua and Jackson, having not lost a single round en route to three stoppage wins.

The last of the four fights comes less than three months after his previous win. Stringing consecutive camps together is not easy, but Jones (14-1) can draw on his experience from earlier this year, when he smashed through Rua to win the light-heavyweight championship despite just six weeks of notice and preparation.

Machida (17-2) does present Jones with a new challenge, however. He is the first true southpaw Jones has faced since making his octagon debut in 2008.

Machida's offensive style has been analyzed for a few years now, to the point that the once seemingly unsolvable riddle is better understood. His success starts with his footwork, which creates angles and spacing designed to benefit his counterstriking preferences. Machida is constantly working to keep his right foot outside his opponent's left foot so that when his opponent strikes, he avoid it and still have his left hand in position for a straight down the middle.

His footwork also quite often sets him up for his favored foot sweep takedowns, a particularly useful tool against orthodox-style fighters. Judging from the numbers, he has a strong handle on the style, as his 58 percent connection rate on significant strikes ranks him in the top 10 in the UFC all-time by FightMetric's count.

He is also a very balanced fighter, firing off punches and kicks in a fairly even ratio. His complexity of attack coupled with his bent-back karate stance never allows his opponent to truly settle in and feel comfortable.

Some of his advantages can be negated by Jones' ability to switch stances. While not much has been made of the fact, Jones is essentially ambidextrous in the cage, routinely moving from southpaw to orthodox and back. Video of Jones' early fights showed that he fought as a right-hander, and his best power punch is a straight right, but he is a natural lefty.

Most fighters will tell you that against top competition, it takes a bit of time to find the rhythm of the fight and their range against any given opponent. When you think about Jones' ridiculous 84.5-inch reach and then you add his ability to switch stances on top of it, it gives his opponents so much information to process, probably too much. Just when you start zeroing in on him, he switches stances and becomes a completely different fighter.

As seems to be the case in every fight, Jones will have a massive advantage in reach, over 10 inches against Machida, who has a 74-inch reach. That, of course, makes Jones very hard to hit.

In fact, though much is made of Machida's elusiveness, you might be surprised to find out that Jones actually avoids more strikes than Machida does. According to FightMetric, opponents trying to hit Jones whiff 67 percent of the time. By comparison, Machida's foes miss 61 percent of their strikes.

One part of the fight that might prove interesting is the clinch game. Jones has exhibited a mastery of the position, using it to fire off knees, elbows and take his opponents down at will. But Machida has displayed excellent skills there as well, and his balance in the position may negate Jones' ability to overwhelm his foes there.

Both fighters have been murderous on the ground. It's the one place Machida allows his killer instinct out with little regard for his own safety, and Jones is always an elbow or two away from ending things if he has the top position. The question is, who is going to get the top position?

This is the part where we stop with the facts and numbers and I theorize what's going to actually happen. It's hard to know exactly how Jones will look. If you look at his last two fights, for example, against Rua he worked a precision striking game, going to the body quite a bit and obliterating him on the ground. Meanwhile, against Jackson, he turned into a kickboxer and attacked Jackson's lower body and legs with a seemingly endless array of kicks. That ability to offer a new look each time out shows a level of maturity that belies his age (24).

Machida always lets his opponent open up the offense, so he will probably do the same on Saturday. That is never going to be a good idea against Jones. I think he will use the southpaw stance quite a bit against Machida, who hasn't faced a southpaw since beating Vernon "Tiger" White in July 2006.

I think this fight will look more similar to the Jackson fight than the Machida fight. He'll hack away at Machida's legs and body. If Machida wades inside, he'll look to clinch and take him down. Around the middle of the fight, the takedowns will start coming as fatigue sets in. And once it goes to the ground, it's over against him. You may survive there, but you're not going to win there.

Jones seems to scout well and prepare well, so Machida's best bet would be to do something unexpected. Offer more aggression. Look to take him down. Offer him a look he hasn't prepared for. The element of surprise is his best weapon. But Machida has always been calculated and measured, and I don't know if he has that change in his constitution. If he doesn't, that's going to be what gets him against Jones.

The champ is well schooled and follows his plan. Even the flashy strikes are within the context of what he's trying to accomplish. Since Machida rarely shows variance, Jones knows what's in front of him. And a knowledgeable Jones is the most dominant force in the game right now. Jones via fourth-round TKO.