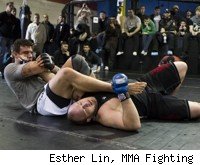 Covering MMA events in a foreign country -- even a minimally foreign country like Canada -- is always a fun and slightly confusing experience. For instance, is gambling on sporting events legal here, or is viewed the same way that smoking marijuana on the street seems to be, which is to say not openly encouraged, but not really a problem, either?

I have no idea, but I do think there are some interesting lines worth taking a look at with UFC 140 heading to the Air Canada Centre in Toronto on Saturday night. Below, let's break them down and see what the oddsmakers have to say about it.

Can we be honest with each other? I don't want to say that Machida has no chance, because a) this is MMA, so no one ever really has no chance, and b) this is a former champ we're talking about here, but come on. How do you see Machida beating Jones? Jumping crane kick to the face? Five rounds of elusive, tactical striking? Again, I can't say it's not possible, but it's certainly not likely. Machida will have a hard time getting in close enough to hurt Jones and still getting back out again before those go-go-Gadget arms stick him. Even if he does get in close, Jones might just toss him and decide to test his wrestling skills. Machida has so few ways to win this, and Jones has so many. I realize we all said more or less the same thing about Fabricio Werdum and Fedor Emelianenko, but here the underdog line isn't even attractive enough to be worth a second look. If Machida were at 5-1, then maybe. If he's only getting "Korean Zombie" odds, then forget it.

My pick: Jones. I'll stick in the parlay, and then I wont give it any more thought.

While talking with Nogueira's wrestling coach this week, he mentioned that the whole team had been curious to see which Mir showed up this week: the 240-pound version, or the 265-pound one? Judging from open workouts, he looks more in the 260 range, which could be good for Nogueira, but only if the fight gets out of the first round. When Mir sticks to his game, he's a wrecking ball. Nogueira was once the kind of fighter who, even when he couldn't get out of the way, could still take it better than anyone. Age and injuries have hampered his ability to do either now.

My pick: Mir. Big Nog made a fool out of me when he upset Brendan Schaub, but I just can't see that brand of lightning striking twice. Put this one in the parlay.

Before showing up in Toronto, I thought this was Little Nog's fight all the way. But after seeing them both on the mats earlier this week, I'm starting to think that Ortiz's takedowns might prove superior to Nogueira's suspect defense. If it becomes a boxing match, Nogueira wins. If Ortiz can put him on his back early, get ready for three long rounds of ground-and-pound. It's one of those fights where each man knows exactly what the other one wants to do, and has known ever since the fight was announced. You just have to wonder who's better prepared to get his way.

My pick: Ortiz. I need an underdog every time out, and if I have to side with "The People's Champ" in the twilight of his career, so be it.

Oddsmakers are right to think of this one as being essentially too close to call. Patrick has a stellar record, but he has nowhere near the experience of Ebersole, nor has he faced the same caliber of competition lately. If I were him, I might be tempted to compensate for those disadvantages by stealing Ebersole's thunder and shaving some clever design into my own chest hair, but somehow I think Ebersole would only be encouraged by that. This could easily go either way, and the odds don't encourage much action in any direction.

My pick: Ebersole. I guess. But I'm not risking the safety of my parlay on it, so I'll steer clear.

Here's one where oddsmakers have the right guy, but the line has gotten more than a little carried away. Should Hominick pick Jung apart? Probably, yeah. He's sharper, more technical, and has better defense. But could Jung conceivably get him down and work some submissions magic? You can't rule it out. It's a little wild to think that Jung and Machida are being given roughly the same chance of winning, when I actually think Jung has a significantly better shot. It's still not enough to make me take the bait, though.

My pick: Hominick. Parlay city, all the way.

- Krzysztof Soszynski (-250) over Igor Pokrajac (+195). Oh, God. I just realized I'm going to have to type their names over and over again in my live blog. Somebody put a bullet in my head now.

The 'For Entertainment Purposes Only' Parlay: Jones + Mir + Hominick + Soszynski