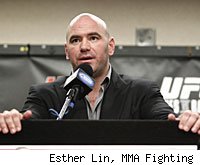 CHICAGO -- The wait is almost over for the arrival of a 125-pound weight class in the UFC.

UFC President Dana White said Wednesday that he expects to make a formal announcement about a flyweight class within a matter of days, likely when he's in Toronto for UFC 140.

"This weekend. We should have something by this weekend. But it's happening," White said.

Several current UFC bantamweights, including Joseph Benavidez, Demetrious Johnson, Charlie Valencia and recent Ultimate Fighter winner John Dodson, would appear likely to move down to 125 pounds. But that will be their decision alone. For his part, White said he won't tell any bantamweights to move down.

"I'm not moving anybody. Those guys can make that decision themselves," White said.

At the moment, the flyweight class is known only to the hardest of hard-core MMA fans, but White said he sees that changing in a hurry, and he thinks adding flyweights will help the UFC attract more fans in Asia and Latin America.

"I have a feeling that 125-pound division is going to be as talented as 155 and 170," White said. "I've been working on it for months. At 125 pounds you're going to see a lot of Hispanic, a lot of Asian fighters now coming to compete at that weight. Traditionally when you look at boxing, Asians or Hispanics have dominated those weights."

The most recent season of The Ultimate Fighter, which featured featherweights and bantamweights, is part of what has White bullish about smaller fighters -- especially Dodson.

"If anything proved how awesome the small guys are it was this season of The Ultimate Fighter," White said. "How about that Finale? The Finale was incredible The Diego [Brandao] fight was probably the best one round I've ever seen. And John Dodson is just phenomenal. The guy is an amazing, explosive athlete."

And he could be a future flyweight champion.