UFC Already Examining Security for Sonnen vs. Silva 2 in Brazil 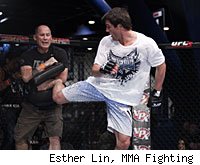 CHICAGO -- UFC President Dana White reiterated on Wednesday that the winner of the upcoming Chael Sonnen-Mark Munoz fight on Fox will take on middleweight champion Anderson Silva some time this summer. And White said that he could see putting together a blockbuster Sonnen-Silva rematch in Brazil, possibly in front of tens of thousands of people in a soccer stadium.

That raises an interesting question: Is White concerned about an ugly scene breaking out if Sonnen continues saying the ugly things he has said about Brazlians in general and Silva in particular?

"We've already started worrying about that," White said. "We will have presidential-type security down there for him. The biggest fear would be should Chael win that night. We'd have to f--king dig a tunnel underneath the Octagon."

But White said he likes the idea of Silva fighting his most hated rival in front of his Brazilian fans. And he said the proper security procedures could ensure a safe environment for Sonnen and everyone else in attendance.

White pointed to a 1993 boxing match between Greg Haugen and Julio Caesar Chavez before 132,247 fans at Estadio Azteca in Mexico City as a precedent for an American fighter going into extremely hostile territory against a beloved champion.

"Greg Haugen said the most horrible things you can ever say about Mexicans," White said. "They walked him in, people were throwing beers at him as he went in, it was crazy. But the fight went off and it was one of the biggest fights in boxing history."

White would like to make Sonnen-Silva 2 one of the biggest fights in MMA history, and he said both Silva and Sonnen will be ready to go, should Sonnen beat Munoz. Sonnen is getting his trash talking started early by accusing Silva of ducking him by faking a shoulder injury, but White said that's just trash talk from Sonnen.

"He knows this: There's no such thing as faking an injury in the UFC," White said. "If I'm trying to make that fight and you tell me you're injured, you come see our doctors, we check them out and verify they're injured. There's no faking injuries in the UFC."