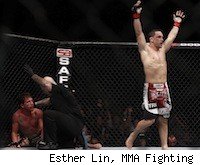 The night of Oct. 8, 2011 is likely to be Frankie Edgar's defining moment as a fighter. On that evening, Edgar authored the most triumphant comeback Houston had seen since the landing of Apollo 13, overcoming a disastrous first round before knocking out challenger Gray Maynard in the fourth.

Edgar is not a fighter who likes to watch much tape on himself, but he's watched and re-watched his UFC 136 performance a few times with his coaches and family, and likens it to an out-of-body experience.

In fact, when he discusses it, he does so in a way that makes it sound like he wasn't there that night, that he was just another fan watching two fighters. A smile forms on his face and he shrugs his shoulders, an unintentional participant in history.

That candid reaction almost comes as a surprise from the usually soft-spoken champion.

Most people who've seen him interviewed know that he speaks quickly and efficiently, an economy of words that mirrors his speedy and effective style in the cage. Sometimes, you have to pull the words out of him.

But his thoughts on that fight are fully formulated, even though it's taken him a few viewings to get there.

He laughs at that before going on.

"Everyone asked how did you make it through the round?" he said. "I don't know. I don't know what it is. I guess I'll attribute it to how I prepare myself, and my will to win. When I watched it, it's like I became a fan of myself, too."

Edgar probably made many new fans that night. After the bout, UFC president Dana White equated his heart and late-round ferocity to that of the late boxing warrior Arturo Gatti. After spending most of the last two years focused on Maynard and BJ Penn, Edgar can finally look forward to a new challenge when he faces Ben Henderson at UFC 143 in Japan in February 2012.

For now, Edgar's in the early stages of planning for the fight. He says he's been impressed with Henderson's tenacity and improvement in romping past Mark Bocek, Jim Miller and Clay Guida in consecutive fights. He also knows he's likely as always to be at a size disadvantage. Henderson recently said he would look to add on a few pounds of muscle to give himself the biggest edge possible.

Edgar says he doesn't worry about things he can't control, and he certainly can't control Henderson's diet. Instead, he will focus on what he does well. And he'll eventually walk to the cage knowing that even if seemingly everything goes wrong, he can summon the will to rebound.

"As far as technique goes, [Ben] is a tough kid," he said. "We've both fought great opponents and he's been impressive. But I'd say my edge is my experience in title fights. I know he was a champ in the WEC, but it's a different animal in the UFC. The media, the lights, the crowd, everything. I don't know if he's sure about all that, but I am. I'm comfortable with it. I'm comfortable with everything."