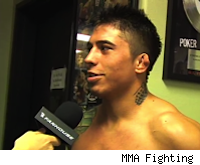 Jon "War Machine" Koppenhaver, the fighter who first gained fame on The Ultimate Fighter before his career was sidelined by legal troubles, has signed on with Bellator, fresh off his release from jail and a win in his first fight back.

Bellator confirmed the signing on Thursday.

Koppenhaver's signing is actually the second time he's hooked up with the organization. In 2009, he was set to start with the group but was cut before ever actually fighting for them after posting published comments that were seen as threatening to U.S. President Barack Obama.

That was just one of a series of problems in a topsy-turvy life that has included among other things, serving one year in jail for a felony assault conviction, and briefly performing in adult movies.

Bellator chairman and CEO said he thought long and hard before bringing Koppenhaver into the fold.

"Jon's not had an easy road," he said. "And there's no doubt he's made some poor choices, but after having had conversations with him since his release, he really seems to understand where and why things went wrong and wants to make them right. And, when he's focused on nothing but training and fighting, he's a talented and exciting fighter. I hope he's able to turn this second chance into something positive."

In his fight career, he is 12-4, and has fought once since regaining his freedom, defeating Roger Huerta by third-round TKO in November.

Bellator did not offer details on when he might debut, but a source close to the fighter told MMA Fighting that he would be included in the upcoming welterweight tournament when their sixth season begins on March 2.