Dan Henderson: Anderson Silva Is 'Conveniently Injured Quite a Bit' 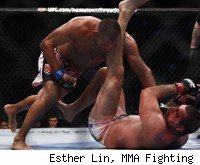 While Dan Henderson wouldn't outright say UFC middleweight champion Anderson Silva has been ducking certain opponents, Henderson believes Silva has directly influenced who his next opponents have been.

"[Anderson Silva's camp has ] done a really good job at kind of manipulating who they fight, who they don't want to fight," Henderson said Monday on The MMA Hour. "He's conveniently injured quite a bit."

Chael Sonnen, who began his career with Henderson even before the official formation of Team Quest, was announced Saturday to face Mark Munoz in a No. 1 contender bout at UFC on FOX 2 in January -- a fight made because Silva remains sidelined due to a shoulder injury.

"[Silva] wants to ensure that he retires for the next how many fights he has without losing," Henderson said. "Anybody that has a chance of beating him he doesn't want to fight. That's just my take on it. Obviously, Chael has show he'd probably beat him up if they ever fought again as long as he doesn't get caught with something stupid at the end of the fight."

In his UFC return last month, Henderson earned a decision over Mauricio "Shogun" Rua at UFC 139 in a fight talked about at times as a possible title eliminator. But that's not the case now that the UFC has decided to match up Rashad Evans and Phil Davis in a No. 1 contender bout at UFC on FOX 2 in February. Henderson isn't pleased with that news as he wants his next fight to be against the winner of Jon Jones vs. Lyoto Machida for the belt.

"I should be given the next title shot regardless," Henderson said.

With No. 1 contender bouts made in both light heavyweight and middleweight, it appears Henderson will have to fight at least a couple more times before he steps in the cage for a title shot.