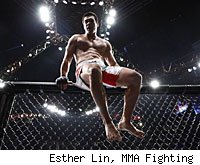 Will Jon Jones continue his domination of the light heavyweight division, or will Lyoto Machida get the belt back? Can Antonio Rodrigo Nogueira avenge his loss to Frank Mir? Will Tito Ortiz continue his surprising career resurgence, or will he be sent a step closer to retirement by Antonio Rogerio Nogueira?

We'll answer those questions and more as we predict the winners at UFC 140.

When: Saturday, the Facebook stream begins at 5:45 PM ET, the Ion televised card starts at 7 and the pay-per-view starts at 9.

Jon Jones vs. Lyoto Machida
With a win, Jones would put a bow on what may have been the best year any fighter has ever had in the UFC: Jones has already destroyed Ryan Bader, Shogun Rua and Rampage Jackson in 2011, and adding Lyoto Machida to that list would be an incredible feat.

Machida, however, may be the light heavyweight whose style is the trickiest for Jones to handle. Machida is so elusive that Jones is going to have a hard time getting to him even with his decided reach advantage, and Machida is such a good counter-striker that Jones is going to have to be careful not to get too fancy. Machida has frustrated a lot of great fighters, and it wouldn't shock me to see him win a decision.

But Jones has been so dominant of late that I simply can't pick against him. If Jones is able to take Machida down he should be able to use his superior strength to bully him on the ground, and even if the fight remains standing, Jones is eventually going to tag Machida the way Shogun Rua did. Of all the light heavyweights in the world, I give Machida the best chance of beating Jones. But right now I'd pick Jones over anyone.
Pick: Jones

Frank Mir vs. Antonio Rodrigo Nogueira
Mir has made no secret that he's a little annoyed that he even has to give Nogueira a rematch, three years after Mir won by TKO. And Mir really doesn't like the fact that Nogueira and his supporters have suggested that an illness prior to the last fight is the reason Nogueira won.

This time around there should be no excuses, and the fight should go more or less the way the last one did: Mir will get the better of Nogueira standing, and he won't even try to engage Nogueira on the ground. Nogueira did earn a solid win over Brendan Schaub in August, but to the extent that these two have changed since the last time they fought, I think Mir has become bigger and stronger while Nogueira has become older and slower.
Pick: Mir

Tito Ortiz vs. Antonio Rogério Nogueira
A year ago Ortiz was largely written off as washed up, but he deserves a lot of credit for persevering: He beat Ryan Bader soundly and then fought a good fight in a losing effort against Rashad Evans. And the mere fact that Ortiz is now preparing to fight for the third time in less than six months, after fighting only once a year every year from 2007 to 2010, says a lot about how much healthier he is after his recovery from back surgery.

Nogueira, on the other hand, is on a two-fight losing streak and hasn't had a really strong performance since he TKO'd Luiz Cane more than two years ago. If either one of these guys has looked washed up recently, it's Little Nog.

However, in this particular matchup Nogueira's boxing is going to carry the day: Nogueira should be able to keep Ortiz at range and batter him with punches, and eventually Nogueira will wear Ortiz down enough to win by TKO.
Pick: Nogueira

Claude Patrick vs. Brian Ebersole
Patrick is 3-0 since signing with the UFC lat year, and if he can win this one he'll start to make some noise in the welterweight division. But Ebersole, who's been fighting for 11 years, is much more experienced than Patrick and has a more versatile ground game, and should be able to win a decision.
Pick: Ebersole

Mark Hominick vs. Chan Sung Jung
My pick for fight of the night, Hominick vs. Jung has all the makings to be one of those fights that makes you lean forward, clench your fists and stare in awe of the intensity of the action. Hominick will have the hometown crowd on his side in Toronto, just as he did the last time he fought, when he lost to Jose Aldo at UFC 129, but in that fight it was a Rocky-like crowd, cheering him because he simply wouldn't quit no matter how much punishment he took. In this fight, Hominick will be the better striker in the cage, and he should be able to out-land Jung and win convincingly.
Pick: Hominick