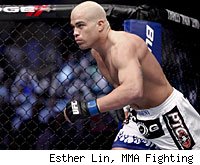 The UFC returns to Toronto this weekend for another big pay-per-view event, though don't expect an all-star stadium show this time around. What you can expect at UFC 140 is a quality card with some big name fighters who are hungry for a win, along with a few lesser-knowns who need a victory just to make sure there are presents under the tree this Christmas.

So who needs a win like Dana White needs a Saturday night off, and what are their chances for a bright future and an upbeat after-party? For answers, we turn to the Cut List.

Tito Ortiz (16-9-1, 15-9-1 UFC)
Who he's facing: Antonio Rogerio Nogueira
Why he's in danger: Remember back before his career-salvaging victory at UFC 132, when Dana White said, "Dude, it's 2011; He's got to win"? Yeah, well I'm pretty sure he didn't mean, 'He's got to win once and then never again.' Ortiz rose from the ashes with his surprising submission of Ryan Bader, and then he further ingratiated himself to the UFC by offering to step up and fight Rashad Evans just a month later. The UFC was so grateful for that favor, it probably didn't even care that he went right back to his losing ways with a second-round TKO. A little goodwill is a fine thing to have in this business, but Ortiz is still 1-5-1 in his last seven bouts, stretching all the way back to 2006. I can see cutting him some slack after his two-month stint as unlikely hero this summer, but how long can he survive on those rapidly fading glories? If he loses to Nogueira, as oddsmakers expect him to, then what? He'll still be a marketable commodity, still one of the UFC's most famous, yet least successful fighters, and he'll still be the guy who did the UFC a solid when others wouldn't. That will buy him some time, but it won't make him untouchable. He's still got to win a few fights here and there, and he'd really help himself out if he can start with a middle-aged Brazilian.
Outlook: Not good. Ortiz is in a tough spot. He's too famous and too expensive for the UFC to put him in against mid-card guys, but he's not quite well-rounded enough to handle the new generation of talented 205-pounders. I don't want to say the game has passed him by, but...okay, it probably has. I think he loses this fight, but still gets one more chance to pull off a resurrection. The more fights he drops, the more the win over Bader looks like one good night in a sea of bad ones.

Antonio Rogerio Nogueira (19-5, 2-2 UFC)
Who he's facing: Tito Ortiz
Why he's in danger: After dropping back-to-back decisions to Ryan Bader and then Phil Davis, Little Nog is now one defeat away from the dreaded three-fight losing streak. He's also 35 years old and the lesser-known of the two Nogueira brothers in the UFC, so it's not at all unfathomable that a loss here could convince the brass that they're carrying one more Nogueira than they need. Face it, it's not as if the UFC is hurting for popular Brazilian fighters at this point. They've got better and they've got younger, so what does Little Nog bring to the table? His ability to shut down strong wrestlers (which the division is positively choking with these days) is questionable at best, and he hasn't finished an opponent since his UFC debut a little over two years ago. So what's keeping him employed? Well, he's still a Nogueira, which is the Brazilian MMA equivalent of being a Baldwin brother. Even if he might be Stephen to Big Nog's Alec, it's still better than being some nobody. Plus, he's still a threat when he can stay upright. If his takedown defense is good enough to force a stand-up fight with Ortiz, you have to like his chances.
Outlook: Cautiously optimistic. I think he beats Ortiz, barring another career resurrection by the "Huntington Beach Bad Boy." Even if he loses, though, I wouldn't be surprised to see him get one more go. Long-term, it's hard to see him lasting in this division with this style.

Dennis Hallman (50-14-2 [1 NC], 3-5 UFC)
Who he's facing: John Makdessi
Why he's in danger: Did you see the man's speedos at UFC 133? Better yet, did you catch Dana White's reaction to the speedos? Personally, I thought it was kind of funny, and not too different from the stuff we see MMA fighters wear with a straight face, but apparently the boss isn't into that brand of humor. It's never a good sign for your career when the other guy gets a bonus solely for getting you and your wardrobe off TV quickly. Hallman didn't make many friends in the UFC that night, and he was already on slightly shaky ground. At 36, Hallman is the journeyman's journeyman. There were times when he would have fought on a week's notice in your living room for a hundred bucks, and he'd even help move the furniture back into place afterward. He put together a couple UFC wins over guys who have since been shown the door, but he squandered whatever good will he had with the speedo stunt. Now he needs to win just to stay viable, and Makdessi's an unbeaten prospect who could make up for what he lacks in experience (and few are as experienced as Hallman) with youth and speed. If Hallman becomes the latest Makdessi knockout victim, you just know White would take pleasure in informing Hallman that he'll soon have plenty of free time to spend sunbathing on the French Riviera.
Outlook: Grim. Hallman's as grizzled a vet as they come, and if he shows up healthy he could definitely give Makdessi problems. Still, he'll need to save a kitten from a burning building to get back in White's good graces. That kitten had better be cute, too. And just adorably smudged with ash, blinking its big, innocent eyes at the new world that Hallman's heroism has allowed it see. Sorry, got carried away.

Mark Bocek: (9-4, 5-4 UFC)
Who he's facing: Nik Lentz
Why he's in danger: Bocek has spent more than half his career quietly toiling away in the UFC, but he's yet to really distinguish himself. He doesn't have a single win over anyone who's still in the UFC, and every time he's faced a high-level opponent he's ended up on the losing end. Then again, he's been in there with some tough customers -- guys like Frankie Edgar, Ben Henderson, and Jim Miller. In fact, the only loss on his record where he hasn't been vindicated by future results is a submission loss to Mac Danzig, so cut him some slack, right? To a point, yes. But eventually he's going to start to look like a guy who'll never be really popular with the fans, will never be anything more than a mid-level truth serum for guys who don't belong in the UFC at all, and is only useful on the fight cards where the UFC needs a local boy. If he loses to Lentz, who has a way of making people look bad, things could come to a head sooner rather than later for Bocek.
Outlook: Hazy. He's a skilled enough fighter that he can still beat a lot of people on the UFC roster, but will he ever beat the big boys? I doubt it, and you can only hang around the middle for so long.