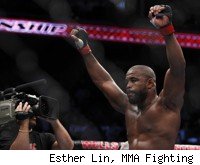 The UFC's TV contract with Spike runs out at the end of the year, and Spike has already announced that it plans to aggressively counter-program the UFC's programming with its new TV partner, FOX.

Spike sent out a press release on Wednesday announcing that it will air a Saturday night programming lineup on January 28 entitled UFC Unleashed: Evans vs. Davis, which will run simultaneously with the UFC on Fox card headlined by Rashad Evans vs. Phil Davis.

Spike's lineup will run from 4 PM to midnight and feature fights involving Evans and Davis, as well as Chael Sonnen, Mark Munoz and Michael Bisping, all of whom are also fighting on the Fox card on Jan. 28.

For Spike, this is basically an attempt to use the powerful marketing of the UFC and Fox against them: Fox will market Evans and Davis during NFL games, and the UFC will put Evans and Davis on billboards, and when fight night rolls around, some viewers flipping through the channels will end up watching their old fights on Spike.

Labeling the event "Evans vs. Davis" may do a disservice to some viewers who will set their DVRs for "Evans vs. Davis" only to realize after the fact that they recorded the wrong program, although it's hard to imagine many viewers will be fooled into watching the wrong fight. But this is the way Spike programming is likely to look for the remainder of 2012: When UFC fighters are live in the Octagon, Spike will treat its viewers to a heavy dose of reruns from the same fighters.