Michael Bisping to Face Demian Maia at UFC on FOX 2 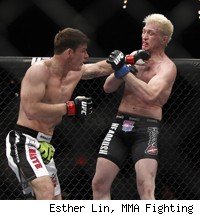 A middleweight clash between Michael Bisping and Demian Maia has been added to the UFC on FOX 2 event on Jan. 28, 2012 at the United Center in Chicago, Ill.

Bisping-Maia joins the previously announced Rashad Evans vs. Phil Davis and Chael Sonnen vs. Mark Munoz matchups in what the UFC is billing a "tripleheader on FOX."

Bisping (22-3) will enter the Jan. 28 fight undefeated in his last four fights. The Brit last Saturday earned a dominant win over Jason "Mayhem" Miller via third-round TKO at The Ultimate Fighter 14 Finale in Las Vegas. Soon after, UFC president Dana White hinted at Bisping being a possible addition to UFC on FOX 2.

Maia (15-3) went .500 in two fights in 2011. Maia fought Munoz at UFC 131 last June to a close unanimous decision loss and then bounced back in October at UFC 136 with a safe decision win over Jorge Santiago.