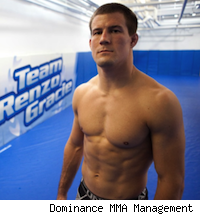 NEW YORK -- John Cholish only has to turn his head to see the top.

It is less than one week until Cholish makes his UFC debut. On a royal blue, sweat-soaked mat at Renzo Gracie Academy on Manhattan's west side, Cholish is one of 40 men studiously drilling escapes from the bottom, paired with Brazilian jiu-jitsu black belt Brian Glick. Seated against the back wall of blue, keeping an eye on his progress is John Danaher, the BJJ wiz who has helped guide the career of welterweight kingpin Georges St-Pierre. The two are constant presences in his career, helping to fine-tune his fight game as he reaches new levels of competition.

But it is the fighter alongside of him that represents where Cholish and every other UFC lightweight wants to eventually go. Less than 15 feet away is current UFC lightweight kingpin Frankie Edgar.

It is impossible to look at one and then the other, and miss the contrast in their situations. One is about to make his entrance on to the sport's biggest stage, the other is the very best in the division he is about to enter.

But on this mat, they are teammates and friends. Edgar is an example from which to learn, a representation of the drive and commitment it takes to reach the top. Cholish has always sought out the best teachers, and on this day, there is no one better to have around than the standard-bearer of your division. This day is Monday, the last official day of Cholish's camp before the UFC rookie flies to Toronto to begin UFC 140 fight week.

The move to the UFC came as something of a surprise to Cholish, who learned of it from a friend who had read the news online. Like many, his was a journey many years in the making. Yet his was also quite unique. When he walks into the cage against Mitch Clarke on Saturday, the Cornell University graduate will be the first Ivy Leaguer ever to fight in the octagon.

With that pedigree, it would be easy to discount him as a public relations tool for the promotion as it prepares for its mainstream push on FOX, but that would be a severe underestimation of his skills.

A lifelong wrestler, Cholish competed collegiately at Cornell, where he was a second-team All-Ivy Leaguer and helped the Big Red to a fourth-place finish at the NCAA championships in 2005. After graduating, Cholish sort of wandered into his current gym in 2006, and basically never left, starting with jiu-jitsu training and eventually adding muay thai into the mix. Within a year, Cholish's interest in MMA had grown so intense that he and his then-roommate, fellow fighter Erik Owings, converted the top level of their duplex into mat space. Even on Sunday mornings after long weeks in the office, there were times when Cholish would find himself up at 7:30 am working on moves.

Cholish lost his first pro fight in 2007, less than a year into his training. Instead of jumping right back in, or quitting as some expected he might, he took time off to advance his skills. Since returning 15 months later, he hasn't lost, and is riding a seven-fight win streak into the octagon, with six straight stoppages along the way.

"John's way ahead of where I was when I first got in," Frankie Edgar told MMA Fighting. "He's had some of the best guys around him to take examples from. He's obviously a very smart guy, he's training hard and prepared 100 percent. He pays attention to detail. He knows what it's all about. He's going to be ready for this one." 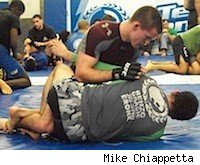 The company he keeps may not say it all, but it says a lot. Cholish not only trains with Edgar and Danaher, but has traveled to Montreal to learn from Georges St-Pierre and Firas Zahabi. On many days at the Gracie Academy, fellow pros and UFC vets like Charlie Brenneman, David Branch and Rafael Natal are all present. Kenny Florian is also known to stop in. At times, it's a who's who of MMA talent.

"The one thing my parents said when I was little is that if you want good things to happen, surround yourself with good people, and if you want bad things to happen, surround yourself with bad people," he says over a lunch of seared tuna and arugula salad at an Asian restaurant called Mooncake just across the street from the gym.

That extends to his other career as well. He works as a commodities broker for a company named Beacon Energy, brokering deals for natural gas and crude oil. The guys yelling "buy" and "sell" while most of us look on cluelessly? Yeah, it's something like that. He brokers deals between major corporations, banks like Goldman Sachs and Morgan Stanley, and companies like Exxon and Hess. It is a career that is as mentally challenging as MMA is physically challenging.

Unlike many fighters who make the jump to the UFC and leave their jobs behind in fear of not being able to devote enough time to improving, Cholish prefers it this way, with his time blocked out for specific tasks. It's not very different from his time in college, when he managed a heavy course load (he majored in applied economics) and a Division I wrestling schedule.

These days, Cholish is usually in the office by 7 or 7:30 am, out at 4 pm, and trains at night. He likes his job so much that it actually upset him to have to miss a few days this week to leave for Toronto on a Tuesday.

"I see it as fun for me," he says of the challenge of demanding dual careers. "I love my life and what I do. I couldn't see it any other way."

His boss and colleagues are big supporters, and he's expecting them as well as other industry friends to fly to Toronto to cheer him on. A "client event," he calls it. His mom, though, would probably prefer it if he stuck to his desk job. While his dad usually travels to events, his mom can't even bring herself to watch on TV, and usually sits home awaiting a phone call for the result. It will be no different this weekend.

In Mitch Clarke, Cholish will be facing an opponent that like him has a wrestling background and the majority of his wins by submission. Clarke is 9-0 and will also be making his UFC debut. If Cholish has one appreciable advantage, it's big show experience, as he fought and won on the undercard of February's Strikeforce event in New Jersey, a show that drew over 11,000 fans.

Despite having several months to prepare, Cholish decided not to bog himself down in film study of his opponent, choosing to work on his overall skills in lieu of fight-specific planning. Finally, just a few weeks ago, he looked at tape, but only for general preparation.

If anyone should know how to prepare for this moment, it's an Ivy League grad with a day job that relies on reading real-time movements with split-second timing. Even with the big moment looming, you can't tell if he has any nerves about it all. He says he doesn't. At least not yet. But they will come.

"People ask me if I'm super nervous," he says. "I've been to a couple of UFC events. I'm the first fight of the evening, so it's going to be like a high school gymnasium in there."

If it is, Cholish might be right at home. Just a wrestler with an insane work ethic trying to prove something to himself, the rest of the world be damned.

The last time he was at a fight, he watched his teammate Frank Edgar knock out Gray Maynard in a stirring championship comeback for the ages. For him, scenes like that are a long way off. But they are also so close. As he leaves Gracie Academy for the last time, Edgar shakes Cholish's hand and wishes him luck. Tells him that he'll be there on Thursday, and to call him if he needs anything. Cholish thanks him and walks out into the New York afternoon headed for his future, a somehow anonymous professional athlete and hotshot executive with two more demanding careers than most anybody walking around him.