Georges St-Pierre Details Knee Injury: 'I Will Be Champion Again, I Promise' 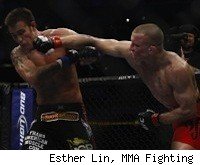 UFC welterweight champion Georges St-Pierre will require reconstruction of the torn ACL in his right knee, a setback that he called a "compensation injury" stemming from a previous issue to his left leg.

in his first comments since the injury forced him out of UFC 143, St-Pierre detailed the circumstances that led up to it and warned those doubting his return at full strength that he would once again rule the UFC's 170-pound class.

"A few months ago I was on top of the world and I'm now I'm in a downfall," St-Pierre said. "But you recognize a champion from how he comes back from things that don't go well. Everybody that says bad things and says bad stuff about me right now, mark my words. I'm going to tell you right now, I'm in a downfall in my life, but in a few months, I'll be back stronger than ever, and I will be champion again. I promise."

St-Pierre said on Wednesday that he hurt himself while wrestling. He heard a crack and felt pain but tried to continue. However, consistent instability in his right leg led him to believe something more severe than originally thought. He eventually visited his orthopedist, Dr. Sebastien Simard, and an MRI showed a complete tear of his ACL as well as a smaller tear in his meniscus.

Dr. Simard, who has twice previously performed surgery on St-Pierre, said he expects the champion to return at the same level of competition as before the injury. While UFC president Dana White said on Wednesday that St-Pierre was out for 10 months, Simard lowered the estimation, saying he expected a full recovery in around 6-9 months. By the time he returns, St-Pierre (22-2) will be 31 years old.

"His recovery rate is completely off the charts," he said.

For now, St-Pierre will be faced with the surgical procedure, followed by rehabilitation and strengthening the knee, which is not the same one which forced him out of October's planned UFC 139 matchup with Carlos Condit.

St-Pierre said he believed that overcompensating for that injury with his healthy leg may have led to more problems.

"I believe there is only one person to blame for what happened and it's myself," he said. "I'm the kind of guy, I endure pain and go through it. I learned a big lesson in my life. It's going to make me stronger, smarter and more clever."

St-Pierre said the diagnosis surprised him as he didn't suffer any common symptoms like swelling. He mentioned that he recently trained with Vitor Belfort and told him that there were positions he was unable to practice because of instability, and he finally visited his doctor to learn the full extent of the problem.

He had two separate MRI's that both confirmed the damage.

In the meantime, Nick Diaz and Condit will fight for the interim title, a move which he called "the right thing to do." St-Pierre said he hopes to be back by the end of 2012 to stake his claim as No. 1.

"Some people will say bad stuff about me, that 'he's finished,' and stuff like that," he said. "What I'm going to tell you is t's very easy to hit a guy when he's down. We have a saying in France, 'The life goes up and down.' People will laugh because I'm in a downfall, I'm hurt, I'm not a threat to them. But I'll be back on top, mark my words."

St-Pierre has been champion for over 1,300 days since taking the title back from Matt Serra at UFC 83 in April 2008, and he hasn't lost in his last nine fights, beating Matt Hughes, Jon Fitch, BJ Penn and Josh Koscheck, among others.