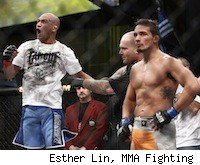 Not long after Michael Bisping was pulled off of Jason "Mayhem" Miller, signifying a TKO victory in the TUF 14 Finale main event, UFC president Dana White voiced his displeasure, calling it "the most one-sided fight I might have ever seen in the UFC."

Given that Miller won the first round on the scorecards of many observers, that seems a bit harsh. This year alone, there have been plenty of other main events, let alone less significant matches, that were far more one-sided than Miller-Bisping. Less than one month ago, Junior dos Santos beat Cain Velasquez in just 64 seconds. In the fall, Jake Ellenberger KO'd Jake Shields in just 53 seconds. In March, Jon Jones beat Mauricio "Shogun" Rua from the opening horn until the third-round finish. Yet Bisping-Miller is the fight he singled out.

That can't be seen as a good sign for Miller, who gave the UFC an entertaining season of TUF, but now awaits word of his future.

To date, no TUF coach has been cut from the UFC after losing in his first match after the show ended, although there are two asterisks worth noting. After TUF 9, Dan Henderson beat opposing coach Bisping, then left the promotion when the sides couldn't reach a deal to extend his expiring contract. And in his first fight after TUF 11, Chuck Liddell was knocked out by Rich Franklin and later retired.

In my opinion, Miller deserves another opportunity. While his offense can be unorthodox, he is still a competitive fighter and brings entertainment value with his presence. The UFC insists they want game fighters who come to put on a show. Even though he lost, Miller did that. He didn't go quietly or surrender. He took a beating and fought on until the referee put common sense ahead of courage. Cutting Miller would send a conflicting message from what fighters have always been told.

On to the future matchups...

Michael Bisping
Another strong performance from the Brit, who remains perpetually underrated and underappreciated despite few holes in his game. After his win, White alluded to the possibility of Bisping being added on to the UFC on FOX event. That would be a fast turnaround, but Bisping always seems to answer the UFC's call. The question is who would be worth his while.

Right about now, a Bisping vs. Vitor Belfort fight would make good sense, but Belfort is locked into an evening with Anthony Johnson, and the UFC generally doesn't like to shuffle fighters around after they're already in the midst of preparing for something specific. So what's left? Mark Munoz and Chael Sonnen have a date, Anderson Silva is on the shelf, and Brian Stann is coming off a loss. Barring anything unexpected, that leaves one choice.
Prediction: He faces Demian Maia

Jason Miller
It would be a mistake to cut Miller. He's one of the few non-champions able to generate interest from mainstream media due to his TV stint as a host on "Bully Beatdown," and this recent loss aside, he's a credible fighter.

For his return, I'd give him a name the fans know, and one who is also teetering on the brink of unemployment.
Prediction: He fights CB Dollaway

Diego Brandao
Brandao received an extraordinary amount of praise for his promise and success throughout season 14, and he also showed poise under pressure in the finale, overcoming a rough start in the early moments of the first round of his featherweight final with Dennis Bermudez before rebounding with a highlight-reel armbar submission.

For all the raves that have come his way, Brandao has much to work on. His striking can be too wild, he can be lured into wars, and he doesn't have great takedown defense. At just 24 years old, he has time to work on those shortcomings, and shouldn't be brought along too quickly.
Prediction: Brandao faces a promotional newcomer in the spring

Dennis Bermudez
Bermudez looked excellent for nearly the entire first round until making a mistake on the ground and leaving himself open to the arm bar. Unfortunately, that seems to be a running theme for Bermudez, who has lost each of his last three pro bouts by first-round submission.

He'll likely get another shot in the octagon but it's going to be sink or swim for him next time around.
Prediction: Bermudez faces either Marcus Brimage or Steve Siler

Tony Ferguson
The standout fighter on season 13 of TUF, Ferguson moved his record to 3-0 in the octagon with a solid decision win over veteran Yves Edwards. Such a victory shouldn't be discounted. To defeat someone with a reservoir of experience on which to draw on is a feat worthy of our attention, particularly given the way Ferguson accomplished it in a workmanlike fashion.

His combination of striking and wrestling ability will make Ferguson a tough out as his confidence grows and he continues on up the ladder.
Prediction: Danny Castillo is coming off a strong win of his own. He sounds about right for Ferguson.

John Dodson
The littlest guy in the house might have been its baddest dude, as he KO'd three of his four opponents in the bantamweight bracket on the way to taking the TUF crown among 135ers.

Dodson has flashed big power as well as the ability to dump opponents on their backs when necessary. Combine those attributes with his athleticism and speed, and you've got yourself a pretty intriguing fighter. Sure, he should probably be fighting at flyweight, but that long-rumored division doesn't seem much closer to happening now than it did 12 months ago, so he's going to have to roll with the bigger guys until then.
Prediction: He faces Ken Stone

TJ Dillashaw
Dillashaw reminded me of Dollaway a bit, a hyped wrestler who fell short in the TUF finals to a smaller man, but regardless of the disappointing performance, he has some undeniable talent which leads me to believe he'll rebound and make himself a force in the division somewhere down the line.

Though his roots are in wrestling, he does show a good striking game with the exception of keeping his hands so low. At his experience level, a loss isn't the worst thing in the world, as it will allow Dillashaw a chance to progress at a more deliberate pace.
Prediction: He faces Alex Soto