Scott Coker: No Announcement on Showtime-Strikeforce Extension, But 'Optimistic' 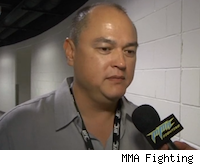 With 2011 rapidly coming to a close, word of an agreement to extend the soon-to-be-expiring deal between Strikeforce and premium cable TV partner Showtime has yet to come.

In the wake of the Strikeforce buyout by UFC parent company Zuffa, negotiations between Strikeforce and Showtime got off to a rocky start, but a management shakeup at Showtime seemed to open the door for renewed hope. Still, they've yielded no firm results just yet, according to Strikeforce's Scott Coker.

"There's nothing to announce, but I'm optimistic at this point," he said on Tuesday.

Asked for a possible timeframe on a decision, Coker declined to offer any specifics.

"That's something that we'll have to just wait and see," he said. "I think things are going well and I think we'll have something to announce shortly, but right now, I have nothing official to announce."

The uncertainty puts the Strikeforce team in something of a strange position. On a Tuesday teleconference designed to promote the upcoming December 17 event that will match lightweight champion Gilbert Melendez against Jorge Masvidal in the main event, both fighters were repeatedly asked about the possibility of soon moving to the UFC.

The promotion has also had to continue planning for future possibilities during a time of flux. For example, Coker mentioned that he is hoping to host the finals of the heayvweight World Grand Prix in March. Meanwhile, fighter contracts constantly need to be addressed, and future venues and dates have to be determined.

Essentially, Coker and the rest of his team must continue as though Strikeforce's future existence is a guarantee. For his part, Coker is plowing ahead with the belief that he'll be promoting events far into 2012 and beyond.

"In the history of Strikeforce since the relationship with Showtime was developed, we put on, I think some of the best fights in the history of MMA," he said. "We've done our part to grow the sport, and that's going to continue. There's still a lot of great fighters on the roster. And we're going to keep building these fighters. We're going to continue putting on great fights. To me, that's not going to change. So everybody can tune into Showtime and watch in 2012, and we're going to put on some amazing, amazing fights."