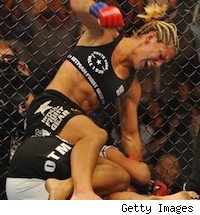 After a seemingly interminable, 18-month trip to the sidelines during the prime of her career, Strikeforce women's featherweight champion Cristiane "Cyborg" Santos is finally heading back where she belongs, in the middle of the cage.

When Santos returns at December 17's Strikeforce: Melendez vs. Masvidal event, she'll have the respected Japanese fighter Hiroko Yamanaka standing across from her, hoping to wrest the belt away. But like always, Santos will enter as a huge favorite to retain her championship in dominant fashion, and a win could open the door for her to become a two-division champion.

That's because Strikeforce CEO Scott Coker told reporters on Tuesday that the promotion plans to continue both Cyborg's featherweight class, as well as the bantamweight class, currently reigned over by champ Miesha Tate. Recently, it had been rumored that the featherweight class would be dropped. But even though Coker suggests Cyborg's division will still be in play, the Brazilian phenom said she is interested in fighting in both classes.

"It's going to be difficult but I'm going to try to make the move if there's more work for me there," Santos said on Tuesday.

"I want to try to do both categories if possible, but I know there is more opportunity at 135," she added.

It's hard to blame "Cyborg" for looking to fill her plate after her recent stretch of inactivity. She had fought four times in 14 months from April 2009 to June 2010, scoring four KO/TKO finishes in that time, but the last of those wins over Jan Finney was the last fight on her contract.

The two sides engaged in lengthy negotiations, and for a time, Santos announced she would fight in her home country, but every possibility to return to action seemed to fall through for her until she finally re-signed with her current promotion in August 2011.

Still just 26 years old, Santos will attempt to shake off the ring rust while defending her belt. She sees the layoff as no issue, choosing to emphasize the improvements she was able to make while honing her craft in the gym.

"I feel like I've gotten better at jiu-jitsu, I've been staying competitive in that aspect," she said. "I've been working on boxing, striking. I feel I'm better and more well-rounded as a fighter than I was before."

If that's true, now fighters in two weight classes will have to contend with her unique blend of athleticism, power and technique.