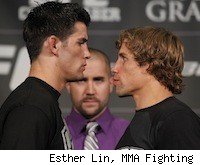 Less than six months after Dominick Cruz defeated Urijah Faber to vanquish his biggest rival and retain the UFC bantamweight title, the champ can begin preparation for a rematch.

That's because on Tuesday, the UFC confirmed that the pair would coach the next season of The Ultimate Fighter when the revamped series moves to its new home on FX.

The season, which will feature both lightweight and welterweight contestants, will begin airing on March 9, 2012, with a two-hour premiere.

Cruz (19-1) has solidified his stronghold as the 135-pound division's best fighter, capturing 10 straight fights overall. Most recently, he defeated Demetrious Johnson by decision at October's UFC on Versus 6. But just prior to that, he beat Faber in a long-awaited rematch of their 2007 fight which remains the only loss on his record.

Cruz injured his hand in the Johnson fight but apparently will be ready to go by the springtime.

"This is a dream come true," Cruz said in a statement. "To get a chance to coach TUF and beat Faber again is all the motivation I need. This is going to be an insane season of The Ultimate Fighter."

The new season will air on Fridays for 13 weeks, with live fights on each episode. That would likely put a Cruz-Faber bout in June, about a year from their last match.

Faber is 26-5 overall and rebounded from his Cruz loss to beat Brian Bowles in a second-round submission at UFC 139, but despite his overall history of success, he's struggled recently in some big fights, going 0-4 in his last four title bouts.