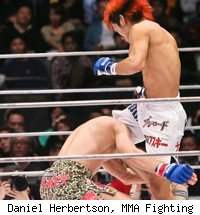 Yuichiro "Jienotsu" Nagashima, who knocked out Shinya Aoki last New Year's Eve in a kickboxing/MMA fight, will fight again under the mixed rules format on Dec. 31 at "Genki Desu Ka!!" taking place at the Saitama Super Arena in Saitama, Japan.

Nagashima, a K-1 MAX fighter known for engaging in school girl cosplay, has been booked to face former DEEP lightweight champion and DREAM veteran Katsunori Kikuno. In this special attraction, one round will be under K-1 kickboxing rules and the other under DREAM mixed martial arts rules.

Nagashima, who fought MMA in 2005-2006 before making the jump full-time to K-1 in 2007, recently made clear his interest in returning to MMA. Following a UFC 137 pre-fight press conference in October, Nagashima introduced himself to UFC president Dana White and asked for an opportunity inside the UFC cage.
At Dynamite!! 2010, Nagashima caught the attention of Japanese MMA fans by scoring a second-round KO over Aoki. And he did so in the MMA round of the fight with a knee four seconds in. Unlike last year, Nagashima will be fighting an MMA fighter who prefers to keep the fight on the feet. Kikuno carries one of the more unusual fighting stances in MMA with his emphasis in Kyokushin Karate. Kikuno also has a judo background but his strength in MMA has been in the standup department. Nine out of his 16 wins have come by way of (T)KO.
The current "Genki Desu Ka!!" lineup is below.