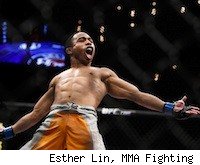 The lessons from some fight nights are subtle -- a bit of meaning you find only after sifting through the blood, sweat, and spilled cans of Xenergy. This was not one of those fight nights.

For anyone with a little bit of sense and decent vision, the takeaways from the TUF 14 Finale were like a flashing neon billboard on the Vegas strip. You couldn't miss it if you tried. Not when a phalanx of bantamweights and featherweights puts on one great fight after another, while the main event features one middleweight who gasses early and another who simply gets tired of beating on him.

Contrasts like that are helpful at times. If you didn't know that the little guys were worth watching before, you do now. Or at least you should. And if an entire season worth of memorable reality TV fights on The Ultimate Fighter wasn't enough for you, they capped it off with perhaps the greatest full finale event in TUF history.

It's not as if we shouldn't have seen this coming, either. Even back when featherweights and bantamweights were relegated to the WEC, putting on twice the fights for half the paychecks, the hardcore fans who consistently tuned in to the Sunday night events on Versus appreciated the quality of the performances they put on. If only these guys could get a chance in the UFC, those fans said. And then they did, only to have the UFC quickly realize that it probably didn't have enough of them.

Putting 135 and 145-pounders on the Spike TV reality show was a brilliant way to both fatten up the roster and introduce the weight classes to a wider audience, and the cast wasted no time making their presence felt with a series of fantastic elimination fights in the very first episode. It went on like that more or less all season long, so maybe we shouldn't be surprised that they delivered at the finale as well.

In fairness, this card was loaded with them. In recent years the TUF Finale has featured only a handful of non-finalists, but Saturday night's event was comprised almost exclusively of reality show participants, giving the smaller fighters plenty of chances to shine.

Only two of the five prelim fights went the distance, and both of those that did (Steven Siler's decision win over Josh Clopton and Marcus Brimage's decision over Stephen Bass) were action-packed affairs that stayed busy and competitive all the way until the end.

On the main card, John Dodson showed not only his power and quickness in a quick TKO win over T.J. Dillashaw, but also his freakish agility in a post-fight celebration that included dueling flips that looked like something out of Crouching Tiger, Hidden Dragon. What's more, he did it all with a smile, which is equal parts creepy and impressive.

Then there was the featherweight finale between Diego Brandao and Dennis Bermudez, which has to be in the conversation for best one-round fight of the year. After they took turns rocking one another in frantic exchanges, Brando nearly got his jaw knocked off his face before somehow recovering to pull off a miraculous armbar with just seconds left in the first round.

Among the eight fights in either the bantamweight or featherweight division from this card, there was hardly a man who didn't seem up to UFC standards. It was a collection of well-conditioned, well-prepared athletes who gave the fans their money's worth before the main eventers even set foot in the cage.

Remind me again why we didn't have these guys in the UFC years ago?

It shouldn't surprise anyone that there are so many talented lighter weight fighters in MMA. I've advanced this theory several times before, but it seems pretty obvious to me that decent heavyweights are hard to come by because big guys who are gifted athletes have more options. You're 6'4" and 250 pounds with speed, agility, coordination, and a competitive fire? I can't blame you if you opt for the NFL over MMA. You'll make more on the practice squad there than most UFC fighters do from fighting, and you get part of the year off.

But if you're Dodson, who is 5'3" and pushing it to fight at 135 pounds, it probably doesn't matter how gifted you are. You're going to be considered too small for most high school football teams, let alone the pros. You're genetically disqualified from most major pro sports right out of the womb, which is true of most of us for one reason or another, but shouldn't be true of this guy, as anyone who's seen what he's capable of already knows.

MMA offers the rare ability to compete against someone roughly your own size every time out, and as a result there is a wealth of talent in the lighter divisions. Conventional wisdom has held that fans simply aren't interested in seeing pint-sized warriors. But then, if we adhered to that kind of thinking we never would have seen the Brandao-Bermudez fight. We never would have seen Dodson flipping around like a Teenage Mutant Ninja Turtle. We wouldn't have had much of a fight night at all, really, and we would have had only ourselves to blame for it.