Seven Ways of Looking at the TUF 14 Finale 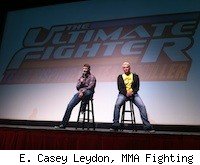 The final season of The Ultimate Fighter on Spike TV is in the books, and only Saturday night's TUF 14 Finale stands between us and the end of an era. Don't get misty on me just yet, though. Blink away those tears and enjoy some thoughts, questions, predictions and observations before it all comes crashing down.

I. The UFC and Spike TV are going to kick each other in the balls all the way to the bitter end. That's how White characterized Spike's decision to counter-program one of the UFC's events on Versus, and he hinted that he might find a way to land a groin strike of his own before it was all over. This week, with a live TUF Finale set to air on the network, he has. No open workouts. No media events at all to promote the show. If UFC.com was your only source of information, you probably wouldn't even know Spike TV was still a network, let alone one that's airing tonight's UFC event. I realize that it's strictly business, but it still feels a little sad. These two were so young and so in love once. There was a time when the UFC and Spike needed and appreciated one another. Now, with the relationship coming to an end, it feels like the fighters on this card are children caught in the crossfire of a bitter divorce.

II. And how are the fighters holding up during this nasty split? Depends who you ask. "Mayhem" Miller is so used to the old Strikeforce way of doing things, he didn't even notice what an unusual fight week this was (until we told him). Michael Bisping, on the other hand, definitely notices. He also seems not totally thrilled about fighting on a Spike TV card in the cramped Pearl at the Palms rather than on a pay-per-view in a big arena, but he's too much of a company man to complain publicly. The TUF finalists? They're just happy to be here; they don't know any better. In the grand scheme of things, this probably won't change anyone's life. One way or another, the fights that are worth seeing will get seen, and the UFC and Spike will both move on. As Miller said when I talked to him for this SI.com story, "They have their own battles. My battle is in a pair of tight shorts."

III. Speaking of "Mayhem," the man is so oddly calm heading into this fight that I fear he might have to change his nickname. Granted, Jason "Mild Disorder" Miller doesn't sound anywhere near as cool, but the wildman we used to know seems to have given way to a mature, responsible individual. It's weird, and even he thinks so. This is the same guy who used to dive on tables full of drinks at L.A. nightclubs. Now he almost seems like someone you'd trust to watch your kids, or at least your dog. Maybe it's a consequence of age. Maybe the trials and tribulations of his last year with Strikeforce matured him a little. If Miller can shed some of the mercurial behavior that's cost him in his career, yet keep the same fire in the cage, he might really go places in the UFC.

IV. Bisping, on the other hand, is about as calm as a hurricane. But then, anybody who attended Friday's weigh-ins already knew that. He looked like he was about to explode when he stepped out on the stage, and the incessant boos didn't do much to settle his spirits. Bisping's an emotional guy, so maybe it will help him to go out there with a little extra fury in his fists. Then again, this is a five-rounder. If it goes into the late rounds with Miller grinding away at him, you have to wonder whether he might expend all that emotional energy too soon.

V. If you're betting against Diego Brandao's takedown defense, you might want to think twice. He's been at Greg Jackson's gym working with some excellent wrestlers of late, and the guys in that camp feel that his takedown defense has come a long way even in the short time since the show. That makes it seem unlikely that Dennis Bermudez will get by on wrestling alone in this fight. Even if he does manage to put the terrifying Brazilian on his back, it's hard to see Bermudez finishing him there. That means he'll have to ride it out for three rounds, which is a risky prospect against a guy with Brandao's aggression and power. If you ask Bisping, he'll tell you that this is a mismatch in Brandao's favor. Unfortunately for Bermudez, he might be right.

VI. At least T.J. Dillashaw and John Dodson agree on one thing: they need to entertain rather than win at all costs. That's what both were saying earlier this week, anyway. They have a good point, when you really think about it. The 135-pound division is still thin enough that the loser of this fight won't get cast out into the darkness. Dodson is probably biding his time until the 125-pound class starts up in the UFC, and Dillashaw is a good-looking kid who the UFC will want to keep around for at least one more go, especially since bantamweights with any name recognition are in short supply these days. All they really have to do is put on a show. That said, it's better to win than to lose, and don't think for a second that either of them has forgotten that.

VII. The real victims of the UFC-Spike TV cold war? Yves Edwards and Tony Ferguson. I don't know if you've noticed, but that's a hell of a good fight for free TV. It's just a shame that it's getting completely ignored. What really shocked me was when I went and looked at the betting odds and saw that Ferguson is a 3-1 favorite. Don't get me wrong, he's looked good in his last two fights, while Edwards is probably on the downslope of a prolific career. At the same time, you can't count out a guy with that much experience in the art of Thug-jitsu.