Chael Sonnen vs. Mark Munoz Set for UFC on Fox 2 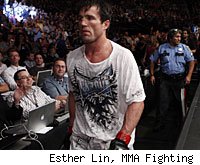 Chael Sonnen will have to win another fight before he can get his long-awaited rematch with Anderson Silva, because the UFC has announced that Sonnen's next fight will take place on January 28 in Chicago, when Sonnen will fight Mark Munoz in the co-main event at the second UFC on Fox event.

Sonnen had been expected to face Silva -- whom he called out after beating Brian Stann in October -- but Silva is nursing a shoulder injury and apparently won't be ready for a few months. So Sonnen vs. Munoz will determine the next No. 1 contender in the middleweight division.

The Sonnen-Munoz fight matches up two of the best wrestlers in the middleweight division; Sonnen used his wrestling to control Silva for four rounds before getting submitted in the fifth, while Munoz is a former NCAA wrestling champion who is currently riding a four-fight winning streak.

A Sonnen-Silva rematch has long been viewed as the biggest fight the UFC could book in its middleweight division, but if Munoz beats Sonnen, a Munoz-Silva fight would also be big. Munoz is 7-1 since moving down to middleweight, with the only loss coming by split decision to former top contender Yushin Okami, so Munoz would certainly be worthy of a title shot if he gets past Sonnen.

The UFC on Fox 2 card will be headlined by Rashad Evans vs. Phil Davis. Other fights expected for the card include Demetrious Johnson vs. Eddie Wineland, Evan Dunham vs. Paul Sass, Jon Olav Einemo vs. Mike Russow and Cody McKenzie vs. Michael Johnson.