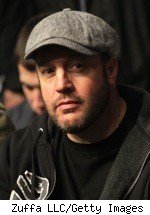 Actor Kevin James will escort Jason "Mayhem" Miller to the cage prior to his Saturday night TUF 14 Finale fight against Michael Bisping, as well as corner his friend during the fight, MMA Fighting confirmed with several members of Team Mayhem.

James, who starred in the CBS hit "King of Queens" for nine years, is a long-time MMA fan and will star in the upcoming MMA-themed motion picture, "Here Comes the Boom," which is expected to be released in October 2012.

Miller and his manager and coach Ryan Parson were integral parts of the production of the film, which, according to IMDB.com, features "a high school biology teacher moonlighting as a mixed martial arts fighter in an effort to raise money to save the school's music program."

Below is a clip of James talking about the film on a recent radio appearance.