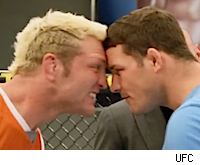 Michael Bisping thinks he has the best case to be the next challenger for middleweight champion Anderson Silva. After all, the thought goes, Mark Munoz has lost more recently than him, and Chael Sonnen already had his shot and failed to capitalize. But Bisping likely has to win twice more before finally getting the opportunity that has eluded him so far in his UFC career.

The first of those times comes on Saturday against the returning Jason "Mayhem" Miller, a rugged veteran who has spent most of the last few years as a mercenary for a host of promotions. Miller, last seen competing against and defeating Kazushi Sakuraba in DREAM over one year ago, will have the task of wiping off his ring rust against one of MMA's most active and well-conditioned middleweights.

Bisping (21-3) is currently considered about a 2-to-1 favorite to win.

The fight matchup is intriguing given their personal strengths, Bisping as a kickboxer and Miller as a grappler. But it's far from a striker vs. ground specialist matchup, too, as both are well-versed in the all-around game.

Bisping's success mostly stems from his three things: his stamina, work rate and complete game. While he is not elite in any one category, he melds his skill sets together well into a well-rounded arsenal. At the heart of it is his kickboxing.

He doesn't have traditional one-strike knockout power, but his ability to press his opponent from bell to bell makes him a tough matchup because it slows you down from getting truly comfortable against him. That is borne out in the statistics. According to FightMetric, Bisping is in the top 10 all-time in strike differential, a key stat which shows your ability to dole out punishment while avoiding return fire.

Given his volume, that stat is even more impressive, as Bisping's 4.59 strikes landed per minute also ranks him among the top 10 in UFC history. Meanwhile, his opponents only connect on 29 percent of strikes against him, once again putting him in the top 10.

Simply put, he spends a lot of time hitting people and not getting hit. This is where most people will inject a Dan Henderson joke at his expense, but the fact remains that the highlight-reel punch lies as a statistical aberration, one not surprisingly pulled off by one of the sport's historical greats.

Despite having no roots as a wrestler, Bisping has also been very good in that department, taking down opponents on 53 percent of tries while stopping opponents on 58 percent of tries against him. He is also excellent at getting back to his feet off a takedown, a skill that may be key against Miller, who does his best work on the ground. Bisping's also never been tapped out, so even if Miller does manage to hold him down for an extended period of time, he's no easy pickings in the submission department.

Despite having been in the sport as a pro for over a decade, Miller (24-7, 1 no contest) is just 30 years old -- two years younger than Bisping. The colorful fighter is willing to fight anywhere but is best known for his excellent ground skills, with 14 of his wins coming via tapout.

Perhaps because he's not known for power, Miller gets a bad rap for his standup. The bottom line when it comes to striking is whether or not it's effective, not how pretty it looks. Miller can be unconventional at times, but he does have underrated fundamentals that allow him to connect at a 50 percent percentage, a better rate than Bisping (40 percent).

It's on the mat where he shines though. Because of Miller's fun-loving personality, it's easy to underrate him, but he's been a high-level grappler for years, even before receiving his black belt in 2010. You may recall that in his November 2009 match with submission wizard Jake Shields, he had Shields in a rear naked choke to end round three but time ran out on him.

That bout is also important for other reasons though. It remains the last time Miller faced top-quality competition. After that, he fought little-known Tim Stout in a Strikeforce fight that was put together on short notice, and then he faced a 41-year-old Sakuraba who had lost three of his last five.

Because of that, how he will respond to being thrust into top competition again is anyone's guess. On one hand, it's been a long time. On the other, he's had quite a bit of time to work on improvements.

When their respective styles meld, Bisping should have the advantage because of his active standup. It's never going to be easy to out-point him on the judges' scorecards when he throws and lands as much as he does. His underrated wrestling should also keep the fight up enough to stay away from Miller's strength. The five-round limit shouldn't be an issue for either, as both are known to be well conditioned and shouldn't have a problem going the distance.

A 25-minute fight is a near-lock in this one. Bisping doesn't have the raw power to put away Miller, who has only been TKO'd once in his career, and Miller isn't likely to keep Bisping on the mat long enough to submit a fighter who has never tapped. That's going to leave a mostly standup battle, and Bisping has the greater possibility of impressing the judges with his quantity, quality and pace. Bisping via decision.