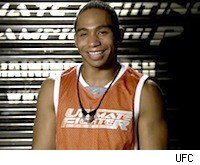 LAS VEGAS -- On Thursday morning at 9 a.m. the UFC PR staff spread this season's Ultimate Fighter finalists out across two conference rooms at the Palms hotel and casino and introduced them to one of the less glamorous aspects of life in a big time fight promotion: the dreaded pre-fight interviews.

"It's going to be about an hour of talking," UFC director of media relations Ant Evans explained as he sat TUF 14 bantamweight finalist T.J. Dillashaw down to begin a series of rapid-fire phone interviews. One look at Dillashaw's face, and you could see he wasn't exactly enthusiastic about the idea.

It could be worse, Evans explained. He could be like Michael Bisping and "Mayhem" Miller, who had two or three hours of interviews scheduled. Somehow, this failed to raise Dillashaw's spirits.

"It's just so fast," he told me later, once it was my turn to monopolize his time. "You're used to not very much media attention at all, and suddenly it's a lot."

That's the case for all four of this year's finalists. In general, bantamweights and featherweights don't get as much love as the bigger fighters on the MMA scene, and the spotlight is even dimmer outside the UFC. After fighting their way onto the reality show and then earning a spot in the finals, they're all finding out for the first time what it's like to stand in the spotlight. Each has his own way of adjusting to this new life on fight week.

"The first time, I cried when I saw [myself] on TV," said featherweight Diego Brandao. "It was crazy."

Brandao's opponent for Saturday night's finale -- Dennis Bermudez -- played it a little cooler. In the next room over, sitting with his coach, Bermudez shrugged off the media pressure.

"I did a lot of high school newspaper articles for wrestling, stuff like that," he said. "For me, it's like a bunch of those, I guess."

What he was happiest about was simply being out of the TUF house and free to move about, he said. People keep telling him that his career is about to be defined by how he performs against Brandao, who seems to have instilled a deep terror into most of his previous opponents, but Bermudez isn't sweating it just yet.

Bantamweight John Dodson -- the only fighter who was all smiles even early in the morning, practically bouncing out of his chair with enthusiasm -- is taking a similar approach. It's not a must-win, he said. Especially not for a guy who's really a natural flyweight, just waiting for the UFC to open the division up. The way he sees it, if he puts on an exciting fight, people will remember him regardless of whether he wins or loses.

For Dodson, the show was a bit of a mixed bag. He was painted as a traitor at times for sharing fight pairing news with the opposing team, and drew the ire of his coach, "Mayhem" Miller, who Dodson did a spot-on impression of as he mimicked Miller's cry of, "Dodson, whyyyy!?!"

"I'm not going to lie, it's still cool to have him talking about me," Dodson grinned.

In fact, that's his take on all the buzz surrounding his reality show stint. That's why he thanked those who hated him most during the show's run.

"People were asking me, why are you thanking the haters? It's because, if I don't have any haters, then it means I wasn't doing anything right. There's a reason people were talking about me."

And while it's nice to be talked about, both Dodson and Dillashaw are hoping that theirs is the fight that becomes the focus of the good kind of post-event talk rather than the bad. You can be a hero or a villain, but one thing these up-and-comers have learned is that you just can't be boring.

"I don't want to put this pressure on myself like I have to win this fight, because I really don't," said Dillashaw. "This sport's for entertainment. I just need to go out there and put on a show. I'm going to win, but I'm going to put on an awesome show and go a hundred miles an hour."

Just don't tell him that reward for success is more interviews. You don't want to send the poor guy in there with mixed emotions.