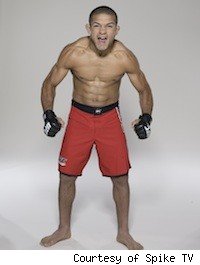 LAS VEGAS -- In case you couldn't tell by watching him fight, TUF 14 featherweight finalist Diego Brandao is something of a Wanderlei Silva fan. Actually, maybe fan is the wrong word. Brandao's more like a disciple, which is why he was thrilled to hear that his fellow Brazilian and MMA inspiration has been following his run on the UFC's reality show.

"I want to fight like Wanderlei Silva," Brandao said earlier this week. "That's why I'm in MMA now, is Wanderlei Silva. The way he fights, he makes everybody in Brazil put their hearts in their mouths."

Brandao was understandably ecstatic when he finally got to meet Silva in Vegas this week, and even more excited when he got a word of encouragement from "The Axe Murderer."

But 'happy' isn't a word most of his TUF 14 castmates would likely use to describe Brandao, who at times seemed almost dangerously intense. Some of his colleagues didn't know how to take that, he said, but to Brandao it seemed like the only sensible approach to a sport that involves fighting other men in a cage.

"When I first get in the house, people think I'm crazy," he said. "But I'm not crazy, bro. This is MMA. For me, it's very serious. You can get hurt if you don't train hard, aren't focused. You can get [your] jaw broken, knee broken, armbar. I'm ready for that. I'm not crazy, I'm just focused on every fight."

So far it's yielded memorable results for the 24-year-old Brazilian. He ran through his competition on TUF, and is among the heaviest favorites on Saturday night's finale fight card, where he'll take on fellow finalist Dennis Bermudez, with Silva watching in the crowd.

The best part, Brandao said, is all the good he'll be able to do for his family back home in Brazil with the money he'll make for this fight, win or lose. They might not have gotten to watch his reality show stint along with the American audience, but they'll reap the rewards along with him, he said.

"I feel very proud of myself. I'm going to be able to help my mom. She doesn't know what's going on now, but pretty soon she's going to find out."