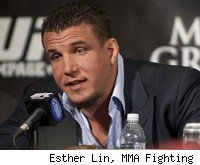 Three years ago, Frank Mir defeated Antonio Rodrigo Nogueira at UFC 92 in a one-sided beating that many of Nogueira's supporters blamed on a staph infection that had plagued Nogueira during his training camp.

After three years of hearing people suggest that he only beat Nogueira because of that staph infection, Mir has heard enough.

In comments to the media Thursday during a promotional call for his UFC 140 rematch with Nogueira, Mir said he thinks fighters who blame a sluggish performance on illnesses or injuries are doing a disservice to their opponents, and that he's tired of all the talk that the staph infection had something to do with Mir's second-round technical knockout victory in December of 2008.

"There were a lot of words, circumstances surrounding the last victory how legitimate it could possibly be because of the illness of Nogueira," Mir said of what he's heard about his victory over Nogueira.

Mir then added, "No excuses afterward."

Although Mir said he realizes that health problems can affect a fighter, he thinks that if you agree to take a fight, it's disrespectful to your opponent to bring up those health issues after the fact.

"As fighters, any time you say you lost because of injury, that's a strike against your opponent," Mir said. "No, the guy in front of you beat you."

In his last two fights, Mir beat Roy Nelson and Mirko Cro Cop, and he said he believes he's getting close to heavyweight title contention if he makes it three in a row against Nogueira. But Mir said he's expecting to see an even better version of Nogueira at UFC 140, considering how impressive Nogueira looked in his victory over Brendan Schaub in August.

"His confidence has to be up higher," Mir said. "You see it in all sports, when people's confidence is high that can be the difference between them being successful and not."

And if he is able to beat a Nogueira who's riding high after beating Schaub, Mir won't want to hear any excuses.