M-1 Challenge 30 to Air December 9, While Showtime Negotiations Continue for 2012 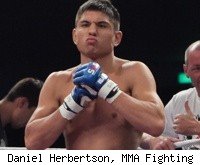 M-1 and Showtime will team up for the fourth time when the two sides air M-1 Challenge 30 live on December 9 at 11 pm.

The event is the final one on the current deal which expires at the end of 2011, and a source with knowledge of the negotiations said the two sides are still in discussions for a 2012 extension.

In the headline slot of the Dec. 9 card is a rematch between M-1 Global welterweight champion Shamil Zavurov and Yasubey Enomoto, the promotion announced on Tuesday. The event will take place at The Hangar at the O.C. Fair and Event Center in Costa Mesa, California.

Zavurov is 18-1 so far in his career, and in April defeated Enomoto by unanimous decision in a five-round fight. That victory extended his win streak to 13 straight bouts.

Meanwhile, Enomoto is 8-3 and coming off back-to-back wins since losing in his first crack at the belt. In that first encounter, Enomoto had just eight days' notice after replacing the injured top contender.

In the co-main event, undefeated Alexander Sarnavsky will put his perfect 16-0 record on the line against Francisco Drinaldo (10-1).